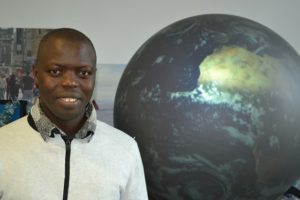 FCFA is training African scientists in new skills and methodologies to study the African climate. Youssouph Sane participated in a week-long workshop on climate modelling at the University of Leeds, organised by the Africa Monsoon Multidisciplinary Analysis 2050 (AMMA-2050) project in December 2016.

Youssouph Sane spends much of his working life thinking about the west African monsoon. He is involved in many aspects of the AMMA-2050 project, which is assessing the causes and consequences of changes in the monsoon as a part of the FCFA programme.

In December, Dr Sane took part in a training workshop organised by the project to skill up on Python, a computer programming language used to analyse various climate models. He and his colleagues also got access to the CMIP5 ensemble of climate models. He will have many immediate opportunities to apply the new skills and knowledge to the AMMA-2050 project, he said: in the first instance, he’ll use Python in modelling the physical dynamics of the west African monsoon. Then, he’ll analyse how the monsoon’s changes are affecting west African lives and livelihoods. Last and most importantly, he and his colleagues will face the challenge of convincing decision-makers to use the new climate information in development policies and programmes.

Dr Sane studied meteorology at masters and doctoral level and takes a long view on the changes in Senegal’s climate: “The impact of climate change is real: if we compare the 19th century and now, we have a difference in precipitation between the periods and we see a high impact from extreme events,” he said. “Extreme events have increased, both dry spells and flooding. There is a big impact on water resources, agriculture and other sectors.”

Long dedicated to environmental causes, Dr Sane said he felt he could make the greatest positive difference to his country’s future by choosing a career in climate sciences, and helping grassroots producers to adapt to the changing conditions.

A bridge from science to practice

ANACIM is a multi-faceted organisation with links to farmers’ organisations as well as being a centre of scientific excellence. This allows Dr Sane to engage with communities on the frontlines of climate change, he said. ANACIM’s many programmes include “advising farmers on new practices to adapt to climate change.”

“We tell farmers what we observe scientifically and we share our forecast. After that, we do a field test in the villages: conventional farming methods alongside new climate-adapted methods. We compare the results in the two fields at the end of the season.” This practical, hands-on demonstration is the only way to convince farmers to evolve their approach in sync with the changing climate, according to Dr Sane.

“We can forecast that we are going to have a short or long rainy season. Depending on the forecast, we discuss what we will do, what the choice of crop varieties for planting will be.”

Whereas much of this work is focused on farmers’ immediate, short-term needs, the research for the AMMA-2050 project will look at longer-term climate projections and what they mean for planning in the agriculture sector.

Skills training will have many uses

The computer programming language that Dr Sane and his FCFA-supported colleagues have been learning in Leeds will be a “good tool to use for any metrics”, he said. Not only will it be useful for his many AMMA-2050 project tasks but also for future work.

This information should be highly relevant for decision-makers in relevant government ministries, such as agriculture and water resources.

However, one of his biggest challenges down the road – he added – would be to ensure that the information is not only used by his ‘home’ ministry, the Ministry of Tourism, but by all the government ministries and departments that could benefit, including water and agriculture.