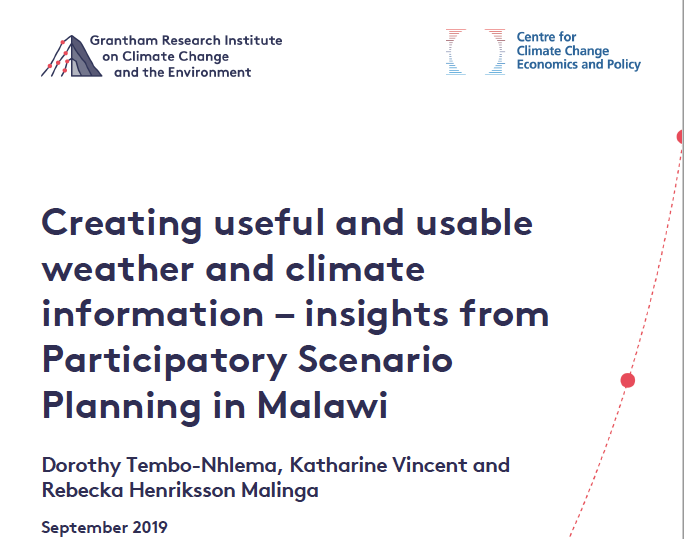 For weather and climate information to be used at the grassroots level, it needs to be effectively interpreted and communicated so that it is both useful and usable. The gap between producers and users, however, has typically not been filled. This paper outlines experiences with Participatory Scenario Planning (PSP). PSP has been used in Malawi as one method to bring together producers and users to co- produce sectoral interpretations of (typically seasonal) weather information to make it both useful and usable to decision-makers, farmers and local level planners. Based on qualitative interviews with the Department of Climate Change and Meteorological Services, NGOs and farmers in Karonga and Mulanje districts, and focus group discussions with district and sub-district climate change-related administrative institutions, the paper elaborates the process and the extent to which farmers have deemed the information generated to be useful and usable. The findings show that, based on the early stages of its application, PSP can generate information that is deemed credible, legitimate and salient by its intended users. Its usability is reinforced through the demonstration effect which leads to even sceptical farmers adopting it after they have witnessed proof of its effectiveness from early adopters. PSP can thus be an effective method to bridge the divide between producers and users. Challenges of PSP in Malawi include the timely availability of seasonal forecasts and appropriate resourcing to facilitate the cascade of information from national to district to sub-district level. In Malawi the sustainability of PSP is threatened due to limited integration of PSP in planning framework and reliance on projects. For optimum effectiveness of PSP there needs to be a mechanism in place to ensure its regular occurrence and embeddedness in formal governance structures.