Oumar Konte: Senegalese scientist is on a mission to give farmers best climate information 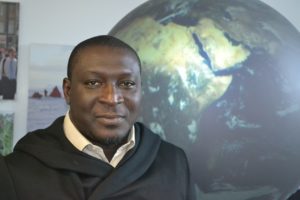 FCFA is training African scientists in new skills and methodologies to study the African climate. Oumar Konte participated in a week-long training workshop on climate modelling at the University of Leeds, organised by the Africa Monsoon Multidisciplinary Analysis 2050 (AMMA-2050) project in December 2016.

Oumar Konte’s daily work in Senegal is about giving farmers useful climate information: to help them make the wisest decisions possible to secure their food and livelihood security. He chose agro-meteorology as a career because – he said– “it is a branch of study where you can help farmers”. It is vital to a country where most of the active population is farmers.

Now acting as Senegal’s Head of Climatology and Climate Services at the Agency for Civil Aviation and Meteorology – ANACIM, Dr Konte has witnessed and studied west Africa’s changing climate for some years: “If you look at a long time series, we have a tendency of decreases in rainfall. The rainfall is changing a lot in Senegal, as in all African countries. Our temperatures are becoming higher. In precipitation, we have great variability. It has a big impact on agriculture and livestock.”

“We have made a lot of effort in our office to help farmers integrate climate information in their decision-making.”

Because farmers face a great deal of variability in weather and climate conditions from one year to the next, they rely on the government’s forecasts to guide their planting times, crop selection and use of fertiliser.

“They want to know when the season will be beginning, if they are going to have good rain or not. And for this we have a lot of projects,” said Dr Konte. His office in ANACIM trains farmers on the nature of climate change and what its implications are for the agricultural environment. Dr Konte’s team produces short-term, seasonal and other forecasts and trains farmers how to use them. SMS text campaigns and rural radio stations help spread the word, when it’s needed.

As part of the African Monsoon Multidisciplinary Analysis 2050 (AMMA-2050) project, supported by the Future Climate for Africa programme, Dr Konte and colleagues will be gathering and analysing a great deal more data about rainfall and temperatures in the west Africa region. Dr Konte took part in training in Leeds, UK last week, learning a new computer script called Python that he will be able to apply to various climate modelling packages.

According to course trainer Dr Rory Fitzpatrick of the University of Leeds: “This skill will give Dr Konte and other workshop participants access to new meteorological data. He and the others will be able to access multi-model ensembles of future climate projections. This will give great benefits when they are trying to understand and project future climate and relevant adaptation strategies.”

“If we get this knowledge, it is a capacity building for us,” said Dr Konte. “I look forward to sharing the new knowledge with my colleagues.”