We are not short of climate knowledge, let’s act on it!

FCFA sponsored a number of journalists to attend the African Climate Risks Conference in Addis Ababa, Ethiopia in October. Below, journalist Sophie Mbugua reflects on her experience. 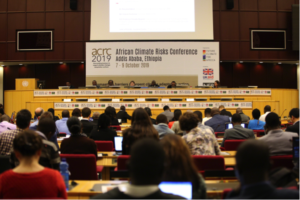 (Photo by IISD/ENB | Kiara Worth)

The Conference held in Addis Ababa under the theme “dismantling barriers to urgent climate change adaptation actions” – shared the latest African climate research and projected future weather and climate scenarios for Africa. It also addressed the state of climate research for development while sharing research conducted in water, energy, cities, and food.

Among the most interesting sessions was a training specifically designed for journalists on the 2019 Intergovernmental Panel on Climate Change (IPCC) special reports on the oceans and cryosphere in a changing climate, and on climate change and land.

The researchers at the conference were clear – temperatures are rising and depending on the region the rainfall levels are getting higher or lower. Already, over 40 people have died in Niger due to floods since June.

A few weeks ago, five people were reported dead as the streets of Youa – a small town located South East of Ivory Coast flooded. In Nigeria, several states have been devastated by floods displacing hundreds of residents while floods along the border between northern Cameroon and Chad have left at least 100,000 people homeless.

In East Africa, residents of Mombasa on the Kenyan coast, are worried of a possible outbreak of water-borne diseases as heavy downpour continues pounding the region flooding most parts of the county whereas death tolls due to floods rise to 29 in Tanzania.

Interestingly, reports on severe drought in Eastern cape, South Africa shows that with slightly over two months to go before year ends, most of the Eastern Cape has yet to receive half of its annual average rainfall.

These are just but examples of climate and weather-related risks already happening on the continent and how vulnerable our infrastructure, communities, food, water, energy, and economies are in the future.

At the opening of the conference, the director of the Global Framework for Climate Services (GFCS) Filipe Lúcio, raised pertinent questions to researchers, practitioners, decision-makers, and journalists attending.

“Do people understand when warnings are given, do they understand the magnitudes of risks? Do governments understand and plan around these risks and is there a knowledge mechanism to incorporate risks into planning within governments?”

Given the many examples of evidence that Africa will endure severe climate change impacts, it is imperative that African governments understand and incorporate these future climate projections to ensure resilient growth.

I have been privileged to attend several conferences on climate change within the region and internationally. At times, most journalists’ events are held concurrently as the main events happen.

The disadvantage is that, we miss on the vital discussions that enrich the stories we are supposed to report on during these events. Contrary, with just one short session specifically organized for journalists, this conference gave us the liberty to attend the workshop sessions – which I appreciated.

When attending a conference, I find myself multi-tasking between gaining knowledge, interviewing, pitching, and delivering stories. I can tell you, it is not easy! Reason being, conferences are a wealth of knowledge, researchers from all over Africa are gathered in one room, and great insights are being discussed – some are so scientific and difficult to understand. But the beauty of panels is that issues are discussed in length and additional information gathered from the audience as opposed to one on one interviews. This is where we gather the meat for our stories making it important for journalists to be present instead of away attending a training.

The training on the IPCC special reports on the oceans and cryosphere in a changing climate, and on climate change and land was rewarding. Have you ever had a discussion with someone on something, which seems so broad at first but then they bring the discussion right onto your doorstep? Right! That is how the session was. Often land and oceans are treated distinctively depending on if the nation’s economy is dependent on land or the ocean. The session broke down the interrelation between land and the ocean. It also discussed opportunities as nations embark on revising and submitting their nationally determined contributions to reduce further emissions both on land and oceans. We should have more of these sessions, as it’s important to equip journalists as we expect them to interrogate these issues in-depth.

There were many side events held on cities, water, energy, food, co-production of climate information services among others I attended. These events demonstrated research being conducted by different scientists.

Sitting in some of them, I noticed solutions for cross-cutting issues are being implemented somewhere in Malawi, Namibia, Uganda or even in Nigeria that can apply to a problem in Kenya. Some of the questions I still baffle with almost two weeks after the conference is “how well is knowledge shared within the continent among the scientific communities? is the wealth of knowledge the scientific community have informing decision making in African countries? How well is the scientific communities, and policy makers working in tandem to shield our communities from future risks? and how best is the African media positioned to report on these emerging risks? ”

The conference was evident that Africa is not short of knowledge on climate change risks nor what we need to do to make our communities, cities, and economies resilient.

Chris Jack a scientist at the University of Cape Town summed it up,

“If you can get everyone working, talking, and understanding the climate problem together, you can start to make progress.”

I hope that this African Climate Risks Conference was just but the beginning of many to come. I also hope that by the next time the conference is held, a lot of the findings discussed will be integrated into planning and successes will be discussed at length and that Africa will be acting more and talking less.

This article was written by Sophie Mbugua.