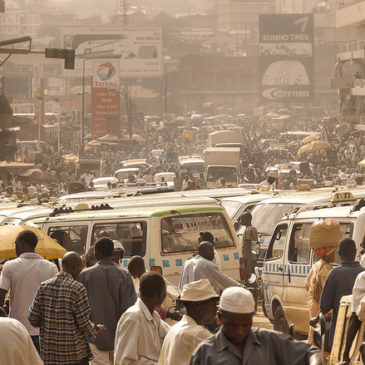 Suzanne Carter, SouthSouthNorth Programme Manager, highlights why we need to start seriously considering the risk of extreme heat in African cities, following the release of the IPCC’s Special Report on 1.5°C.

The Intergovernmental Panel on Climate Change (IPCC) Special Report on 1.5°C was approved on 6 October. The report shows that by current estimates, the Earth has already warmed by 1°C (by 2017) above pre-industrial levels and that we are on track to reach 1.5°C between 2030 and 2052 at the present rate of emissions. But given that 1.5°C average warming equates to some locations being hotter than the average, I wanted to highlight the urgent need to pay more attention to extreme heat in the African urban context.

Heatwaves are one of the more easily predicted weather phenomena and can cause mass fatalities in vulnerable groups such as the elderly, young children and outdoor workers (e.g. construction), but heat is often a ‘silent killer’. In Africa, heat is commonly seen as ‘normal’ and the general perception is that people are well adapted to cope with it. One reason for this, highlighted by a recent discussion at the Adaptation Futures 2018 conference, is that elderly people may not see themselves as ‘old’ and therefore don’t recognise their increased risk to heatwaves.

Recent work from the Raising Risk Awareness project, looked at extreme event attribution in Kenya and Ethiopia, and found that policy makers were less interested in understanding extreme heat. The focus instead was on drought and floods which are both more closely associated with human fatalities and food security. Heat, in contrast, which is generally easier to attribute to climate change, was not seen as relevant.

However, the IPCC special report suggests that it will become relevant as ‘the number of highly unusual hot days is projected to increase the most in the tropics’ where a large number of African countries lie. A global temperature rise of 1.5°C could take us into territory where we see dangerous warming in Africa, and in African cities in particular. The report says that there is high confidence that ‘risks with increasing warming are particularly higher in urban areas due to the heat island effect’. This effect makes cities hotter than the surrounding area predominantly due to dark surfaces like roads retaining heat and reduced greenery.

A C40 study called “The future we don’t want” published earlier this year found that 354 major cities across the globe already experience average summer temperatures over 35°C, with this number climbing to 970 by 2050. On days when temperatures reach 35°C, a marked increase in hospital admissions and deaths occur in most countries. The research shows that only a few cities in Africa are dealing with extreme heat currently but this is set to increase dramatically, particularly for southern, western and northern Africa. By 2050, many of the most at risk cities with large urban populations in poverty will be in West Africa, as well as Sudan and Egypt.

The combination of high heat and poverty can be deadly, but some interventions can lower the number of fatalities. For example, support by the Climate and Development Knowledge Network (CDKN) to the city of Ahmedabad, in Gujarat State, India, to adopt a Heat Action Plan  has significantly lowered the number of fatalities after extreme heat events, from over 1000 in 2010 to only seven in 2016. The plan has since been replicated across the Gujarat state.

There are a lot of ways to reduce heat risk, some are structural like making green roofs out of reflective surfaces, and others behavioural like reminding people to drink more water on hot days and staying out of the sun during the hottest times of the day.  African cities have large numbers of informal or slum areas, where there will be specific challenges for dealing with heat. For example, informal houses with corrugated iron roofs get extremely hot during heat waves. A framework of working with informality to build climate resilience in African cities, developed by the African Centre for cities, provides strategies to better address these challenges.

A key aspect of reducing risk is to build public awareness of what to do during heat extremes, supported by good coordination between meteorologists, government officials and the media. The second aspect is to have trained medical staff and community workers ready to prevent and respond to heatwaves, backed by interagency emergency response.

More people need to recognise the dangers of heat on human health and act to set up the systems to prevent heat related deaths. Heatwaves are predictable so there is time to react and save lives, but good planning and coordination amongst actors is vital to ensure this happens. Look out for a heat wave guide for Africa and Asia that the Red Cross Red Crescent Climate Centre are publishing in 2019 to help decision makers plan for increased heat extremes.

This piece was adapted from the original blog posted on 8 October on www.cdkn.org.