Southern Africa is one of the few land-based regions in the world for which climate models are in agreement that rainfall will decline as the planet warms. This projected rainfall decline is strongest in the southern hemisphere spring, and manifests as a delay in the onset of the summer rainy season. However, this drying occurs in the context of a poorly understood climate, and so scientists don’t really understand why the models all display such clear agreement. Recent work by UMFULA has aimed to produce a better understanding of the weather systems that form the building blocks of the southern African climate system, in order to address this issue.

The Congo Air Boundary (CAB) is one such weather system that UMFULA identified as a key importance to southern African rainfall, particularly in Angola, Zambia, and the southern DRC. This work identifies the CAB as a line where the humidity rapidly changes from very humid to very dry over the space of a couple of hundred kilometres. This means that the CAB marks the border between the humid, tropical airmass that encompasses the Congo rainforest, and the arid subtropical airmass further south. While the CAB is well known to local meteorologists and to paleoclimatologists, it has not been studied by climate scientists since the advent of modern weather observations.

These days, atmospheric models combined with observations of the atmosphere from various sources including satellites are used to generate weather forecasts and reanalysis products: a ‘best guess’ estimate of the state of the atmosphere on a given date. Though they are subject to uncertainty in some regions (including southern Africa) where the observational network is sparse, these reanalysis products form an invaluable resource for climate scientists. 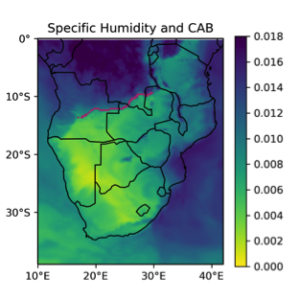 UMFULA’s work has shown that according to reanalysis products, between August and November each year, the CAB steadily moves south from the Congo basin towards southern Angola and southern Zambia as a long, east-west oriented line. As it does so it brings the summer rains, since tropical rainfall cannot fall from the dry, cloudless skies to the south of the CAB. The location of the CAB is closely linked to the Angola heat low, a shallow low pressure system which forms due to the intense heating that occurs on Angola’s plateaus in spring and “sucks” the tropical airmass southwards towards it through a series of low-level atmospheric jets.

Starting in mid-October to around November, we found that spells of weather frequently occur in which the CAB breaks down, and the humidity gradient becomes a lot more gradual. During these spells, gaps appear in the CAB. he tropical airmass can move south through these gaps without restriction, mixing with humid air brought inland from the Indian Ocean and creating storms across southern Africa. A second discontinuity then forms near the boundary of Namibia and Botswana, which we have labelled the Kalahari Discontinuity (KD). The KD forms the westward limit of where storms, and their associated rainfall, occur during these CAB breakdown events.

How well do climate models represent the CAB?

Having established a good understanding of the seasonal cycle of the CAB and the mechanisms that drive it, we proceeded to investigate whether the CAB was well represented in the models that are used to generate climate change projections. We wanted to see whether these models would project future changes in the CAB, which could tell us something about the projected southern African drying trend. We compared 18 future projections of the climate from 2070-2100 under the RCP8.5 warming scenario to 18 corresponding simulations, generated using the same climate models, of the climate between 1970 and 2100. RCP8.5 assumes that no action is taken to mitigate climate change in South Africa and surrounding nations. 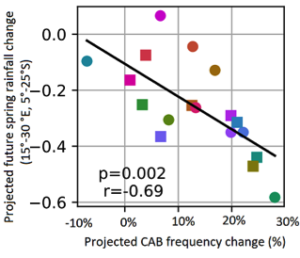 The results were stark. All but one of the 18 climate models we studied had a good representation of the CAB compared to the reanalysis products, reproducing its location, detection frequency and seasonal southward shift in simulations of the present climate. Furthermore, the future climate simulations from all these 17 models predicted that the CAB would progress southwards more slowly at the end of the 21st Century, and that its November breakdown would occur on average two weeks later than in the present climate.

As these breakdown events create rain over southern Africa, the spring drying and the projected delay in rainfall onset are explained by the projected delay in the occurrence of CAB breakdown events. The 17 different models all showed varying magnitudes of change, and we found that the models that showed a greater future change in the CAB properties also showed the largest spring drying signals, and vice versa. (Figure 2).

We were able to show that the projected rainfall decline in southern Africa largely occurs because the CAB breaks down less frequently. In the simulations of future climate, this reduces the number of opportunities for the tropical air from the Congo to escape southwards and create rain in southern Africa.

What will the impact be on southern Africa?

This paints a grim picture for those relying on early summer rains for crop production and the likely need for farmers and local communities to adapt to the earlier decline in rainfall as a result of climate change. However, our work assumes that no action will be taken to mitigate climate change. Analysis of intermediate emissions scenarios suggests that any mitigation that does occur can be expected to reduce the intensity of southern African drying. This research has uncovered the mechanism that is expected to cause spring rainfall decline and the delay of the wet season in southern Africa, providing greater certainty for policymakers. Ongoing monitoring of changes in the CAB’s behaviour and further research into the weather processes that govern it can help us stay on top of understanding the degree to which climate change is affecting tropical rainfall in southern Africa.

To date, our work has been based entirely on atmospheric datasets derived from remote satellite observations, and climate models. We have shown that climate models are able to simulate the CAB well compared to reanalysis products, but we don’t know whether the reanalysis products themselves are right. To be confident of whether these models and datasets are really doing a good job of representing the southern African climate, direct weather balloon-based observations of the CAB are crucial. These observations would constrain whether the simulations of the current climate are accurate, and therefore would provide the missing link in our confidence in the southern African projected drying trend.

This article was written by UMFULA researcher, Dr Emma Howard, who was also supported by a General Sir John Monash Scholarship.

UMFULA aims to support decision-makers in the water, energy and agriculture sectors to integrate climate information in their medium term (5-40 year) planning decisions in central and southern Africa.