South Sudan’s farmers are returning to their farms and seeking better livelihoods. A green-powered community radio initiative is broadcasting weather and climate information that guides farmers on when to plant seeds, and so yield the healthiest crops in a changing climate. Isaiah Esipisu reports. 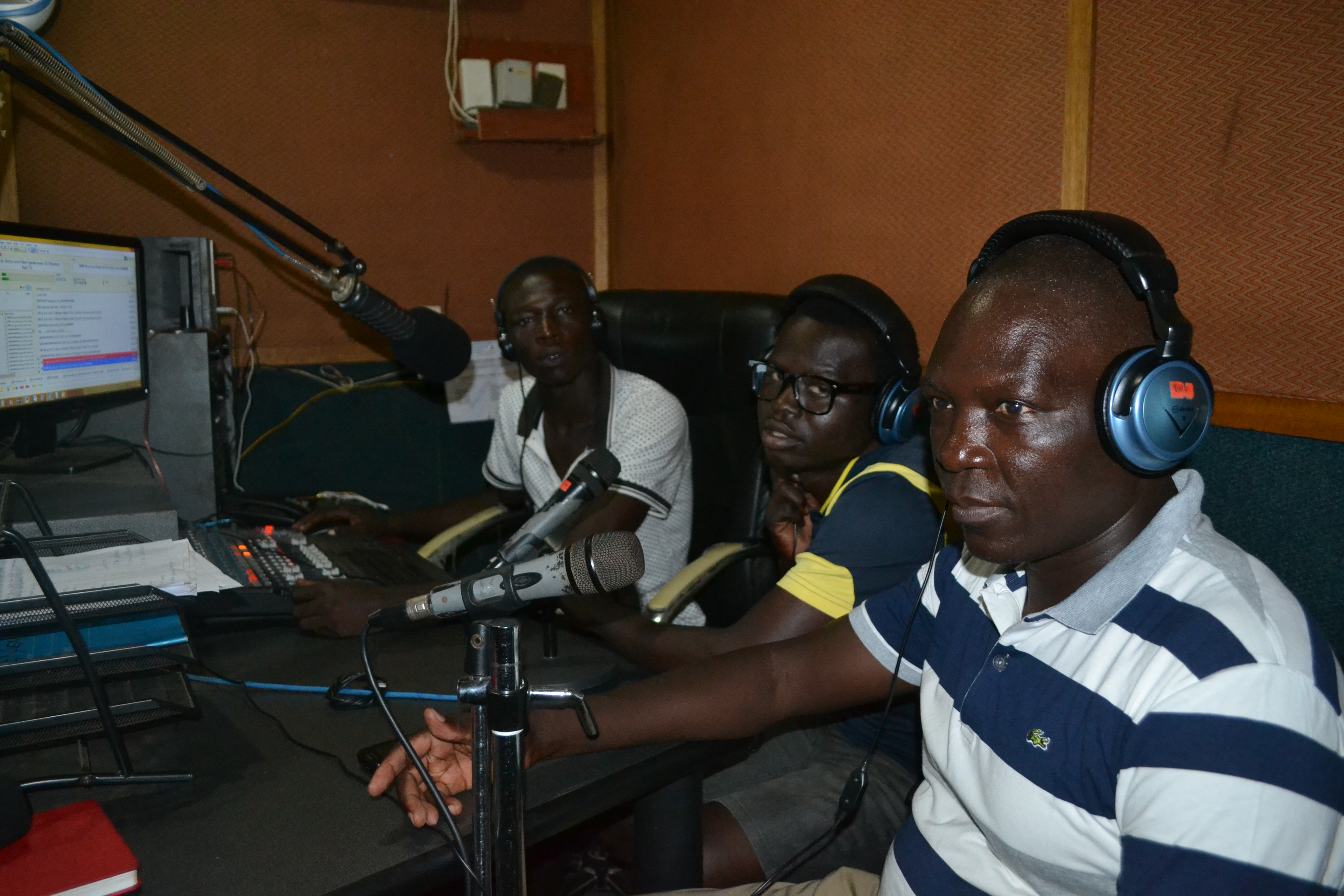 On a Tuesday morning on August 10, 2019 at 7.00 o’clock, Moses Okwera, a presenter at a community radio station – 93.0 FM Voice of Freedom in Magwi County – reads the news brief and then plays a signature tune to introduce a daily morning show known as ‘Wake up Magwi.’ The guest in the studio is an agricultural expert.

This catches the attention of William Otoo, a 30 year old farmer in Cherekon village, about 20 kilometres out of Magwi town in the southern part of South Sudan. Otoo immediately increases the volume of his cell battery powered FM radio handset. His main interest is to know when it is likely going to rain so that he can start planting for the season.

“Today we are privileged to have Oryem Cosmas P’Lonam, the Chief Executive Office for the Magwi Seed Company in the studio — also known as MASCO,” announces the broadcaster, as Otoo sinks into his old sofa-set ready to learn more from the CEO of a seed company that is now supplying Magwi County with improved, certified seeds for the first time in history.

“This community radio has been the main source of information for me and other farmers in this area,” said Otoo.

South Sudan, which got its independence from Sudan in 2011 is yet to put in place proper communication infrastructure following ethnic violence that has continuously rocked the country since 2013.

Without grid electricity all over the country including the capital Juba, it has been difficult for telecommunication companies to invest in transmission stations, hence, accessing mobile telephone network remains a pipedream for millions in rural areas.

Internet connectivity is never there in many villages, and is not guaranteed even in major towns like Magwi, including some parts of the capital city.

The roads are extremely dilapidated, making it nearly impossible for agricultural experts including extension service providers to reach out to farmers in far villages.

“It is just about 50 kilometres from Magwi to Torit town, but it is never a surprise for one to start the journey today morning, and spend the night on the way so as to arrive in Torit the next day, depending on the strength of the vehicle, and the mechanical condition,” remarked a businessman in Magwi, who was waiting for motorbike spare parts to be transported to Torit town.

In that regard, the 93.0 community FM radio, whose transmission infrastructure is powered by solar energy with the signal reaching all the villages of Magwi remains the only source of vital information to the residents.

“Before I go for the radio show, I always do a lot of research especially about prevailing weather and climate information because it is the most important thing for farmers who have bought seeds from us, and those seed growers whom we have contracted to multiply seed for our company,” said P’Lonam.

Due to civil conflicts, many farmers had run away to seek refuge in neighbouring countries. But most of them are now returning home to reclaim their farms, which have since turned into thick forests.

“The radio station has become part of our extension service providers because when we are discussing a particular subject, people who are lucky to have access to telephone network always call in to ask questions and also to seek clarifications,” said P’Lonam.

Otoo admits that it is through listening to such programmes that he has flourished in his farming venture in the past two years. At the age of 30 years, he is the first farmer in the entire country to multiply hybrid maize seed, with support from a seed company known as Green Horizon, and the Alliance for a Green Revolution in Africa (AGRA).

“Rainfall seasons are not the same as it were when I was growing up,” he said. “When I was about 10 years old, my mother could always prepare for planting any time from March 25. But nowadays, the seasonal rainfall can delay for another two to three weeks, or come much earlier than expected,” said the farmer who dropped out of school before finishing the secondary level education due to civil conflicts.

Situated on a 100 by 100 metre plot of land and with a 60-metre mast donated by the county office, Voice of Freedom, which broadcasts in five different languages, covers everything ranging from local and international news to original programming on conflict resolution, the rights of children, women, persons with disabilities, weather forecasts, and agriculture among others.

The station has largely been dependent on resources donated by the community – such as volunteer time and story leads. It previously run on expensive diesel power generators until August, 2015. That’s when Internews intervened by installing 22 solar panels and setting up new electrical system to support it.

Many other communities throughout the country as well rely on such community-based radio stations to get vital information concerning their lives and livelihoods.

This article was written by Isaiah Esipisu.