The Peanut Basin in Senegal is the heartland of agriculture in this West African country. On the average hot day in summer the temperature might reach around 28°C. But the temperature in the soil, baking under the sun, may climb to as high as 60°C, which can take its toll on the microbial life in the top layer of ground. If these heat spells don’t last for too long, soil organisms bounce back fairly quickly, and can continue to support crop growth. 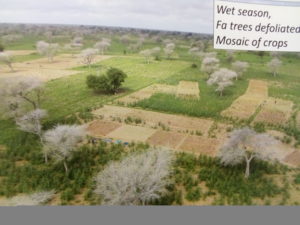 Biologists working in the Peanut Basin in Senegal have confirmed the importance of organic fertiliser, such as animal manure, in protecting soil health in agricultural fields following extreme heat events. (Credit: Paul Ciss.)

What will happen, scientists wondered, if rising global temperatures start to push daily maximum temperatures higher in coming years. And what will happen if this kind of heat in the soil last for days, rather than just hours? What would it mean for the health and productivity of these soils in a part of the country where important staple crops like sorghum, millet, and peanuts grow?

Dr Laure Tall, a biological scientist at the Senegalese Agricultural Research Institute (ISRA) based in Dakar, travelled out into the Peanut Basin at the beginning of the growing season in July 2017 to test this idea. Tall and doctoral student Paul Ciss collected soil samples from croplands that are typical of farming conditions here.

‘We wanted to see how the duration of heat stress might affect the stability and diversity of microbial communities in the soil, and specifically whether this response is influenced by the agricultural practice of using organic fertilisers,’ says Tall.

The climate projections for the region suggest that central Senegal will experience more extreme weather events in future, and researchers wanted to test if soils will still be able to offer the natural ‘services’ needed for growing crops, should this happen.

Tall and Ciss collected soil samples from fields close to farmers’ homes, which are typically fertilised regularly using animal manure and household organic waste. They then collected comparative samples from lands further away from villages, which may only get treated with organic fertiliser three or four times a year.

‘The soils from the fertilised fields close to the villages were not disrupted by this heat treatment,’ explains Tall, ‘but those from the fields that had less manure treatment, were. The microbes in the soils that were exposed to heat for a long time were not able to recover.’

The disturbing result from this experiment, she says, is that it shows that soil microbes might be more vulnerable to heat stress than previously thought.

‘We often assume that microbes are quick to recover from heat events,’ Tall goes on to say, ‘but this suggests that if the likely changes in climate conditions are big, then soils may not be able to recover again within a single crop season. They may recover over the course of a year, but won’t bounce back within the three crop growth month period.’

The take-home message, though, is that applying organic fertiliser can help make soil microbes more resilient and allow them to recover faster following extreme heat events.

‘The climate projections for the region indicate that there may be longer and more intense dry spells during the growing season, along with more extreme heat events,’ says Tall.

The total rainfall measured across the whole rainy season may remain the same, but there are likely to be more intense rain events, interspersed with longer periods of no rain, which will result in boom-and-bust periods of flooding and drought. Farmers may be able to support the soils to survive these changing conditions by applying more manure and other organic fertiliser.

The work reported on in this story is part of the AMMA-2050 (African Monsoon Multi-disciplinary Analysis 2050) research project, which aims to support decision-makers in West Africa to integrate this knowledge into climate-sensitive decisions.

This article was written by Leonie Joubert as part of a series that delves into the science that has been produced by various FCFA projects, and introduces some of the people behind it.