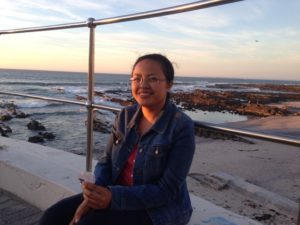 Dr Rondrotiana Barimalala is one of the co-authors of the next IPCC report.

Natural features like the shape of the Indian Ocean island of Madagascar have an important impact on natural rainfall patterns over Southern Africa. But understanding how human-caused global heating will change inbound weather systems from the Indian Ocean and how this will alter rainfall over the eastern region of the subcontinent, is still unclear and computer-based modelling projections are filled with uncertainty.

Artificially flattening the profile of the island in these climate models may help oceanographers and climate modellers refine the models used to project future rainfall patterns here, and produce more reliable forecasts.

Dr Rondro Barimalala an oceanographer from Madagascar has been working on this model refining process for a number of years, after she specialised as a climate modeller through her doctoral and post-doctoral studies. More recently, this work has landed her a place on the Intergovernmental Panel on Climate Change’s (IPCC) global panel of expert climate scientists.

Every seven years, the IPCC panel produces an overview of the current science which lays out the extent of greenhouse gas pollution in the Earth’s atmosphere, the impact this has on global temperatures and the climate system, and the necessary adaptation and mitigation responses. The consequent assessment reports inform all IPCC participating countries’ national-level policy responses to reduce greenhouse gas emissions to levels, which scientists have identified, are necessary to keep the global average temperature from rising more than 1.5°C relative to pre-industrial levels.

The IPCC’s much-anticipated Sixth Assessment Report is due out in 2022. Barimalala is one of the panel’s scientific reviewers, and a lead author on the section of the report, which uses climate modelling processes to explain the human causes of climate change.

The climate models used to project rainfall across Southern Africa are filled with uncertainties, explains the young researcher who grew up in Arivonimamo, a town about 45 minutes’ drive from the capital of Madagascar, Antananarivo. To test the models’ accuracy in projecting future rainfall trends, modellers run the computer simulations to see if they can replicate historic rainfall patterns that were measured under known climate conditions. If these simulations match the observed historic records, then the climate scientists know that their simulations are reliable.

‘In these model runs, most climate models overestimate the historic rainfall over mainland southern Africa, and underestimate the rainfall east of Madagascar,’ explains Barimalala.

To refine the models, and correct them against this sort of bias, researchers can tweak them in various ways.

‘We understand that the topography of Madagascar blocks the transport of moisture coming into the subcontinent from the Indian Ocean,’ explains Barimalala. ‘By lowering the topography of the island in the models, and effectively removing Madagascar from the map, we can then compare the model outputs with those from the models where we leave the topography as normal. This helps us take out some of the biases that might exist in the current models.’

The early assessment of this fine-tuning process suggests that when Madagascar is artificially removed from the map under known climate conditions, the simulation shows that rainfall over east Africa is higher than the measured rainfall, and when the normal topography is used, rainfall decreases in the region.

‘In theory, climate models that accurately represent the present or historic climate have less uncertainty in representing the future. Understanding of different processes that drive the climate system, like the topography of Madagascar, leads to a more accurate representation of the present climate,’ she says.

Barimalala began working on this model refining process as part of her post-doctoral research in 2017 when she moved to the University of Cape Town and joined the UMFULA research consortia part of Future Climate for Africa.

Being an IPCC global science reviewer

After Barimalala completed her doctoral studies through the International Center for Theoretical Physics, at the University of Trieste in northern Italy, she spent a year at the Georgia Institute of Technology in Atlanta, USA, and two years at the Center for Ocean, Land, Atmospheric Studies in Virginia in USA, before a brief spell at the Shanghai Jiao Tong University in China. She then moved to South Africa to join the Cape Town-based FCFA team. As a result of the modelling experience she gained during this time, she was then nominated by the IPCC’s Madagascar ‘focal point’ team in 2017 to be included in the global expert panel.

‘The process involves reading the latest published scientific papers in this field globally, and giving a critical assessment of the results,’ she explains. ‘Do the findings in each paper make sense? Are the scientific interpretations accurate?’

Once this analysis is done for each section of the IPCC assessment report, the specialist authors for each section write up their findings and send these to external reviewers for peer assessment, ahead of final publication in 2022.

The IPCC review and authorship process has opened her up to a global network of professionals, allowed her to read much more widely in her specialist area, and tested her critical faculties, she says, ahead of her time with FCFA coming to an end in December 2019.

‘I’d like to continue studying the African climate, because it’s not well understood and FCFA has allowed us to advance this field significantly.’

Ultimately she would like to return to her home country, but when this happens depends on a post in her specialist field opening up in Madagascar.

Dr Rondrotiana Barimalala is part of the UMFULA research consortium. UMFULA aims to improve climate information for decision-making in central and southern Africa, with a particular focus on Tanzania and Malawi.