Three years ago, the main water treatment plant for the Zimbabwean capital, Harare, received an injection of funding for a much-needed upgrade, as part of a ‘rapid results’ approach by national government. But if national government officials had sat down with Harare City Council engineers, who are more directly involved in the day-to-day operations of water delivery to city residents and industries, they would have found that it might have been better to first invest in upgrading the bulk-water pipe infrastructure before repairing the treatment plant itself.

According to city engineers, the Harare water system loses an estimated 40 per cent of its potable water because of broken pipes.

The finding itself is significant, explains Harare-based Dr Mzime Ndebele-Murisa, programme specialist with the US-funded non-governmental organisation START International. Although what was equally significant about this finding, she says, was the meeting which brought national and city-level officials together.

Working with START, Ndebele-Murisa teamed up with the multi-country research and development partnership, FRACTAL, a project aimed at supporting city officials to integrate climate change issues into their development and planning. Part of this process was not just to assist government decision-makers through providing them with useful and current climate science, but to create discussion platforms that brought together scientists, development organisations, and officials across different spheres of government so that they can plan more coherently around preparing for future climate conditions. 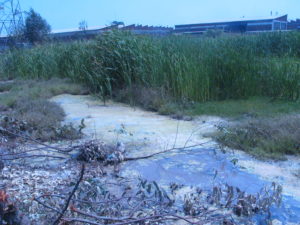 Damage to wetlands and pollution in rivers are amongst the biggest challenges to Harare City Council meeting its service delivery obligations to the Zimbabwean capital. (Photo credit: Dr Mzime Ndebele-Murisa.)

Analysis of a single decision, to understand the whole

One of these interactions was a workshop aimed specifically at understanding the decision-making processes used in the water sector in Harare. To better understand all the main stakeholders in this sort of decision ‘value chain’, as well as the possible ‘shadow players’, Ndebele-Murisa and FRACTAL decided to use a single decision-making case study as the lens: the national government’s decision to allocate loan funding to an infrastructure upgrade of the Morton Jaffray water treatment plant.

‘We set up a workshop in Harare in 2017, to create a think-tank environment,’ says Ndebele-Murisa. ‘We wanted to keep the workshop small, with no more than ten people. We already had a good idea of who the main actors in the water sector were because FRACTAL was funding a Masters student at the local university to work as an embedded researcher within the Harare City Council water department.’

With embedded researcher Rudo Mamombe helping with the relationship-building and the practicalities of the workshop, the FRACTAL initiative was able to bring together government officials from various national and local government departments.

‘Officials from the Zimbabwe National Water Authority were there, because they are responsible for regulating water allocation, even within urban areas,’ Ndebele-Murisa expands. ‘Meanwhile the Harare City Council officials were there because they handle bulk water treatment and supply, and have to deal with the national authority to get the city’s raw water supply.’

They also invited officials from the Ministry of Health and Child Care and residents associations, since recent cholera outbreaks show the overlap between water management and public health. Similarly, the national Department of Climate Change Management was also asked to be present.

‘Through the discussions we had in the workshop, we realised that while the media creates the perception that the blame for failures in water service delivery is often only directed at the Harare City Council, in this case the decision to upgrade the water treatment plant was taken by national government without much consultation with local government and residents about what their needs were,’ says Ndebele-Murisa.

It was through this workshop that local government was able to communicate with their national government colleagues that the bulk-water pipe supply lines needed urgent upgrades, possibly ahead of the treatment plant.

‘Many of the participants said that what was significant about this workshop, was that this was the first time that these critical stakeholders in different spheres of Zimbabwe’s water management had come together to think and plan.’

‘The take-home message for us, following this engagement, is that climate change stakeholders must invest in having consultations like this before making expensive infrastructure planning decisions,’ says Ndebele-Murisa.

This workshop was just one of many different processes – city ‘learning labs’, workshops, and other partnering opportunities – run within countries, and through city-to-city exchanges coordinated by FRACTAL, in order to support municipalities across southern Africa with understanding in integrating climate change into their planning.

Challenges relating to the water sector in Harare – including wetland management, sewage, industrial pollution, and water infrastructure – are central to the country’s climate response, according to the FRACTAL team’s collaboration with the southern African country.

Because of these various workshops and city lab engagements between Zimbabwe officials, FRACTAL, and START International, Ndebele-Murisa’s team was able to identify the need for the Harare City Council to set up an environmental management unit which has an officer representing each city department.

‘This unit has its own offices, with a managing officer who reports to the town clerk and the council. With all the relevant city departments represented in this unit, meaning each officer can report between their departments and the environmental unit,’ Ndebele-Murisa says.

The focus of the unit is on environmental management, ecological protection, water, and building resilience against natural disasters, and climate change, with the view to strengthening the city council’s forward planning.

The work reported on in this story is part of the Future Resilience for African Cities and Lands (FRACTAL) research consortia within FCFA which aims to link city environments and climate scientists in order to support decision-makers to integrate this knowledge into climate-sensitive decisions at city-regional scale in sub-Saharan Africa.

This article was written by Leonie Joubert as part of a series that delves into the science that has been produced by various FCFA projects, and introduces some of the people behind it.