The news media is a load-bearing wall in a healthy democracy. Its role is to act as a watchdog of government, and to keep citizens informed and participating in the running of a country. Central to this is keeping society informed about the most pressing challenges and threats.

But when it comes to reporting on issues relating to climate, the news media still regards this as an environmental issue. Newsrooms prioritise resources towards reporting on other ‘priority’ journalistic beats, such as current events, politics, economics, health, and even sport.

In 2018, the United Nations Intergovernmental Panel on Climate Change (IPCC) released the most up-to-date scientific evidence on the state of carbon pollution in the atmosphere in its Global Warming of 1.5°C special report, demonstrating that climate change is as the most urgent threat facing society in the immediate future.

The training was geared towards journalists working across different news beats, including politics, economics, development issues, health, and agriculture. The focus was to help participants identify pressing climate issues within their specialist reporting areas, their geographic regions, and which are relevant to their target audiences. 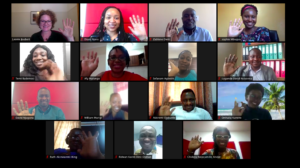 Participants from across Africa joined online for the training.

Joining the dots between the global issue and the local story

FCFA research fellow Dr Zablone Owiti laid out the scientific consensus as presented in the IPCC’s Global Warming of 1.5°C report, with a focus on the need for adaptation response on the continent, where some parts are warming at twice the rate of the global average.

The IPCC report outlines the extent to which global heating is destabilising the climate system, and that society faces a small and closing window of opportunity in which to slow and reverse carbon pollution trends, in order to avoid pushing global heating above a ‘safe’ threshold of between 1.5°C and 2°C. With current trends, heating is on track to reach 3°C or more.

However, most African countries are responsible for a small percentage of the carbon pollution driving up global temperatures, and yet are disproportionately vulnerable to the impacts of climate change. For this reason, the training focused on the need for African countries to adapt to changing conditions, and negotiate internationally for support from the global North in order to develop in line with shared, low-carbon goals.

Diana Njeru from BBC Media Action in Nairobi presented on the importance of ‘lifeline communications’ during extreme weather events. When communities are in crisis, such as when the Mozambican coastal city of Beira was struck by Cyclone Idai in early 2019, news media can serve as a vital source of information for how people can access humanitarian aid, or find safe shelter and health care during an emergency.

Nairobi-based science communications specialist Patrick Luganda, who is the chairman of the Network of Climate Journalists in the Greater Horn of Africa (NECJOGHA), helped journalists make the link between the global climate crisis and achieving the UN’s Sustainable Development Goals on the ground in Africa.

Science journalists Sophie Mbugua from Nairobi and Leonie Joubert from Cape Town, South Africa, who co-facilitated the workshops, presented case studies to demonstrate that climate stories are not limited to the environmental beat. They also identified the most important sources of information for relevant climate science, and talked journalists through how to access and use these often complex and technically difficult materials.

The workshops allowed for 15 participants. However, FCFA received nearly 200 applications from journalists across the continent, showing the appetite for such training. FCFA plans to repeat the training in late November 2020 and in early 2021.