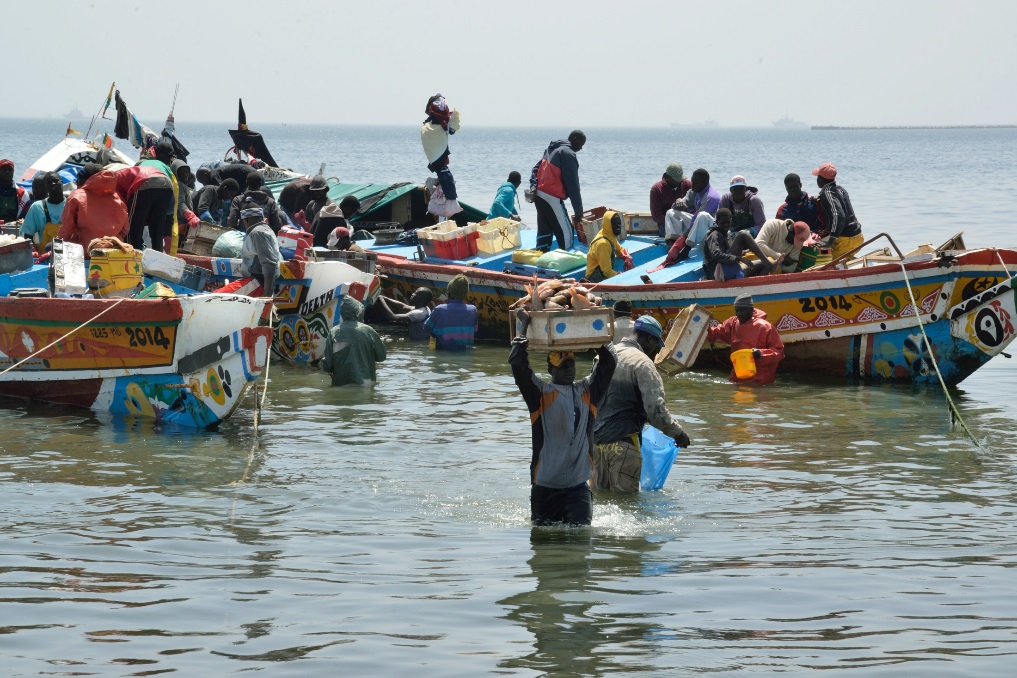 Small surface-dwelling fish like sardines are the most important source of protein in the West African country of Senegal. Changes in alongshore wind speeds and ocean temperature could disrupt the food chain here in coming decades. (Image: supplied)

The Canary upwelling ocean current is a conveyor belt-like flow of ocean water that sweeps along the northwest coast of Africa. Winds blowing from the continent and out to sea drive the surface waters away from the coast, allowing cold, nutrient-rich waters to rush up from the ocean floor. These nutrients produce blooms of algae, which feed the microscopic animals in the water, the zooplankton, which are an important link in the food chain, which produces the rich fisheries here in the North Atlantic.

Countries along this coastline, such as Senegal, Mauritania, and Guinea, rely heavily on this ocean system as a source of food and employment. The fisheries, which thrive in this upwelling system, are Senegal’s most important source of protein, particularly the small fish that live in waters close to the surface of the ocean, like sardines.

These fisheries are under rising pressure, though, due to economic development, increasing population, and the likely impact of climate change.

Research shows that if the surface water temperature rises by between 2°C to 3°C in coming decades, it could disrupt the nutrient cycle in these waters, impacting these pelagic fish.

This is according to Dr Siny Ndoye, a physical oceanographer based at the University of Dakar in Senegal.

“These fisheries are also important to the large fishing communities that operate around the Cape Verde peninsula on which our capital, Dakar, is built,” he says.

Previous climate change modelling, which is included in the Intergovernmental Panel on Climate Change’s various reports on the ongoing advances in climate change science around the planet, has given a broad overview of the likely impacts of rising global temperatures on local climatic conditions around Dakar and along the Senegalese coast. But most of this modelling did not zoom in closely enough on the region to make fine-grained projections of how changing conditions might influence the interaction between rising temperatures, changes in offshore wind speeds, and the upwelling of these nutrient-rich waters which feed the pelagic fish here.

Dr Ndoye and two doctoral students, Lala Kounta and Adama Sylla, worked on this with a multi-country cross-disciplinary team of researchers who are tailoring climate modelling processes in the region to produce detailed projections for how conditions in these parts might change as human-caused carbon emissions into the atmosphere continue to drive up temperatures globally, and how this might alter regional climates.

“One of the key species of zooplankton in the Senegalese waters is sensitive to temperatures above about 23°C,” explains Dr Ndoye. “Our initial modelling looks at how often temperatures in the water will push above this important threshold by the year 2030, and by 2090.”

The team argues that a decline in zooplankton as climatic conditions change off the West African coast will impact on the diet of some fish, mostly sardines and other surface-dwelling species (Wiafe et al, 2008).

“The implications of what this will mean higher up in the food chain has not been studied specifically, and how it will impact on fish will depend on what happens within the zooplankton ecosystem.”

Another feature of the work, the focus of Sylla’s research, is to see how the movement of the offshore winds might change in future. If wind speed drops, it will slow the upwelling circulation of water and prevent nutrients reaching the surface of the ocean here.

Sylla’s modelling suggests that the intensity of the upwelling off the Senegalese coast during winter and spring will decrease ‘moderately’ in future, mostly because of slowing offshore winds.

The team’s initial modelling suggests that while wind speed is likely to slow by about 10 per cent, this alone won’t have significant impact on the upwelling system. Ndoye says it is the combined effect of changes in temperature and wind speed change that will impact on the habitat of the small pelagic fish in these waters.

Lala’s work tends to substantiate old assertions about the connection between the boundary current flowing offshore of Senegal and Mauritania as well as pole ward flow in the Gulf of Guinea. Long-term changes of regional currents are unknown.

“We still have a lot of unanswered questions, though, and hope to deepen our studies in the coming months.”

Ndoye’s team, based at the Laboratoire de Physique de l’Atmosphere et de l’Ocean are working alongside researchers at the IRD (the Institut de recherche pour le Développement), are also looking at how acidification along this coastline, due to the water absorbing greater concentrations of carbon from the atmosphere, will impact on the ocean ecosystem. They will consider how other environmental stresses such as overfishing, sewerage spilling into the ocean from the capital Dakar, and offshore oil drilling might impact on fisheries.

“An important part of this work is also to communicate these scientific findings to those in the fishing industry, as well as parliamentarians, government officials, and policy makers,” he says.

“We have been working with these stakeholders since 2007, so that they can better understand and respond to how climate change and other environmental factors that could impact fisheries along our coast.”

The project also hopes to give a boost to marine research here, by training up students in the field, producing scientific publications of their findings, and building observation research sites along the coast in order to monitor conditions more closely in future.

“One of our main challenges is communicating this complex science to policy makers. We don’t have enough strong channels between the main stakeholders in government and fishing communities, so this is something we are trying to address,” says Ndoye.

The work reported on in this story is part of Future Climate for Africa’s AMMA-2050 (African Monsoon Multi-disciplinary Analysis 2050) team. AMMA-2050 aims to address the challenges of understanding how the monsoon will change in future decades, to 2050, and how this information can be most effectively used to support climate-compatible development in the region.