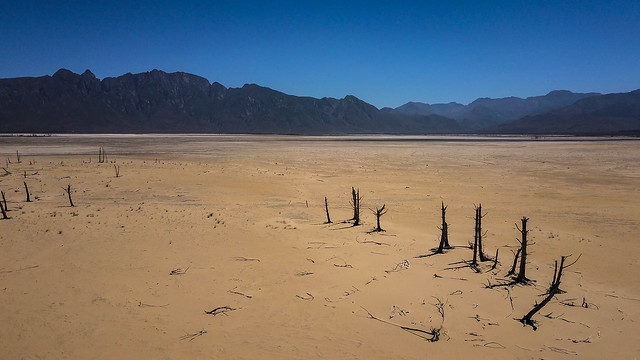 Keeping water in the taps of a city the size of Cape Town is a team effort. It calls for a spectrum of people to work together to manage a water system that spreads for many kilometres beyond the urban edge of the city across the mountainous catchments with at least five major dams feeding it. The collaboration involves people responsible for the day-to-day operational decisions, through to those who handle the decades-long infrastructure planning and building, and many layers of technicians and bureaucrats in between.

This kind of sophisticated water management system is why cities like Cape Town or Johannesburg are even able to exist, since neither is close to a readily available body of fresh water like most other major cities globally.

If city water managers want to incorporate climate change into their future planning, they need to take into consideration things like changing rainfall patterns, or how increased summertime heat and wind speed might impact changes in demand patterns and on evaporation from dams. Usually, to do this, they reach for the region-wide climate models that paint various scenarios of possible future trends in temperature, rainfall, storm activity, or wind speeds.

The usual top-down approach for incorporating long-term climate projections into a region’s water management involves taking the climate model outputs and then considering how water should be planned for and moved around within the existing system.

But a new way of integrating climate forecasts into regional water planning has recently been tested in southern Africa, which may help cities across the subcontinent be more responsive as the region’s climate becomes more variable and less predictable compared with historic records.

‘Another way to plan for climate change, in relation to managing a region-wide water system, is to take a bottom-up approach,’ explains water resources engineer James Cullis with the engineering and infrastructure advisory firm Aurecon. ‘This approach means looking at the existing system of river basins, dams, and other infrastructure.’

Once researchers have the infrastructure map for the water system for a city like Cape Town, for instance, they can then look at how population and economic growth are expected to increase, what that means for future water demand, and then consider how sensitive the system is to future changes in rainfall and climate trends.

‘By understanding where the vulnerability is within that system, you can look for where the breaking points are.’

Cullis was recently part of a team, which piloted this novel bottom-up approach as part of a research process done with the Future Resilience for African Cities and Lands (FRACTAL) research group.

Cities that have a more diverse source of water supply, across a number of river basins, are going to be more resilient against climate-related shocks, such as the recent three-year drought which nearly brought Cape Town’s economy to a halt when municipal dams came close to running dry in the summer of 2018.

Managing a system as complex as Cape Town’s involves operational decisions across many different timescales. Short-term weather forecasts will inform how utility managers draw down water during the upcoming month. A seasonal forecast will help them plan how to move water between dams and catchments in the upcoming year, and have any emergency backup plans in place should the forecasts anticipate a low rainfall season or extended drought. The longer-term climate models can anticipate which of the wider catchments might see an overall drying out in coming decades.

‘This bottom-up approach allows us to look at the system that we have as a whole, how sensitive it is to change – for instance, can it handle a 10 per cent reduction without going into crisis? What are its thresholds, and how much variability can we manage within the existing system without climate changing? At what point do we need to start adding more solutions to the system and what then will climate change mean for this specific system?’ says Cullis.

The drought which hit Cape Town between 2015 and 2018 was the worst recorded drought in over a century of record keeping. During the crisis, the city responded with various strategies to prevent the shutdown of the water system. This involved urgent demand-side management, mostly driven towards getting consumers to cut their water use drastically. Part of the supply-side response was to begin costing and planning for a more diverse range of bulk water supply options, including drilling utility scale boreholes into key aquifers, upscaling waste water treatment plants, and desalination. But these solutions were geared towards making the city more resilient in the case of future droughts, since few of them would be able to deliver enough ‘new’ water within the time frame of the drought as it was unfolding.

‘You can’t build your way out of a crisis as bad as that drought, but you can plan for longer-term resilience.’ explains Cullis. ‘This bottom-up approach to mapping a city’s water risk is a way of doing that.’

Future Climate for Africa (FCFA) is a cross-disciplinary, multi-country research and development partnership that aims to generate fundamentally new climate science focused on Africa, and to ensure that this science has an impact on human development across the continent. The work reported on in this story is part of the Future Resilience for African Cities and Lands (FRACTAL) research group which aims to support decision-makers to integrate this knowledge into climate-sensitive decisions at city-regional scale.