A new, fine-grained climate model designed for Africa, which better catches the details of air currents driving rainfall and storm activity across the continent, is producing more robust future projections for overall rainfall and high-impact extreme rain events than previous models. This improved climate information will support more effective planning relating to the future risks from increased heavy rainfall and the likely flooding that will result from this.

When climate scientists used this new CP4-Africa (CP4A) model to project changing rainfall and storm activity across the Sahel region of West Africa, it showed that rainfall from extreme events will increase in intensity by five to ten times across the region. This is significantly higher than what a conventional climate model projects, which only gives a two to three fold increase in the rainfall associated with high-impact events.

Scientists maintain that even a two to three fold increase in the intensity of such events would have ‘huge adverse impacts’, meaning that the new outputs from the CP4A model are cause for greater concern.

The implications of this sort of increase in storm events will be a greater risk of flash flooding associated with more intense short-lived storms. Meanwhile, the CP4A model projects an increase in the number of long, dry spells between rain events during the wet season, which will impact on agriculture, according to climate science manager at the UK’s Met Office, Dr Elizabeth Kendon.

The CP4A model was run at the UK Met Office, as part of a 4-year collaborative project involving 40 climate scientists at various institutions across Africa and the UK. It zooms in on a 4.5km by 4.5km geographic grid, which is able to better represent the physics of convective storms, including the detailed updrafts and downdrafts, which shape the formation of clouds and drive rainfall.

When climate scientists at the Met Office compared the output of the CP4A model with a more conventional climate model – a ‘regional climate model’ or RCM which works on a coarser 25km by 25km grid – they found that the model shows a much greater future increase in the intensity of storm events, regardless of whether the overall rainfall across the rainy season in the Sahel increases or decreases.

Previous models have been unable to give robust information on likely changes in the day-to-day rainfall intensities and dry spells. The new results from the CP4A model now allow climate scientists to look in greater detail at how this rainfall variability may change in future, which is important for understanding flood risk and impacts on agriculture and water resource management.

‘In areas where there are small catchments which respond quickly to rainfall, short but intense storms will result in flash flooding,’ explains Kendon. Cities are particularly vulnerable to these types of events, and drainage design in urban areas becomes important. These intense events can result in erosion, nutrients leaching from soils, silting of dams, and other impacts on agriculture, she says.

Longer duration heavy events are expected to decrease in future across the Sahel region. However this doesn’t mean that river flooding will decrease, according to Met Office scientists, as more intense rainfall from the shorter and heavier bursts will nevertheless end up in rivers.

These findings are the result of a comparative model-run process done by Kendon’s Met Office colleagues, headed by Dr Ségolène Berthou, and published in the journal Geophysical Research Letters in November 2019.

When climate scientists test the fine-grained CP4A model by simulating climate from a period of time in the past, it is better able to show recorded storm patterns than the RCM model. The Met Office scientists therefore regard the projected climate outputs from the CP4A model as more robust than those from previous models run at coarser resolution. 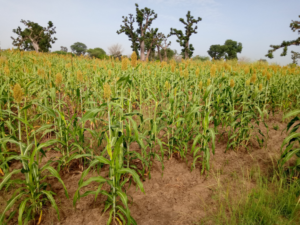 A new Africa-focused climate model shows increased risk of high-impact rain events in the Sahel, broken by longer periods of drought, which will impact on agriculture, health, and sanitation in the region. (Credit: Paul Ciss.)

This significant increase in the intensity of high-impact storms is concerning, says Kendon, with periods of longer drought broken by high-impact rain events. They are likely to hit the hydrological and agriculture systems particularly hard.

The impact of these changes on flash-flooding will also have serious implications for health and sanitation in the region, especially in areas of informal settlements.

‘It’s worth remembering, too, that these model runs are working on the assumption that atmospheric greenhouse gas emissions continue to rise as they are. The models aren’t just a warning for how countries in West Africa need to adapt to changing rainfall trends in their regions. It’s a reminder that if we don’t act globally to reduce emissions, these are the serious consequences that Africa will face.’

The work reported on in this story is part of the IMPALA (Improving model processes for African Climate)  and AMMA-2050(African Monsoon Multi-disciplinary Analysis 2050) research consortia of FCFA.