Lusaka is one of Africa’s fastest growing cities, and urban densification and economic growth will call for more strategic planning of its water supply and infrastructure. The Zambian capital has enough water supply for the foreseeable future, however the growing demand for this resource from city users, the hydro-power scheme on the river which supplies Lusaka’s electricity, and the sugarcane industry upriver of the city, will call for greater cooperation between the city and various government departments that are responsible for these different sectors.

This is particularly important as rainfall and water recharge in the Kafue Flats Basin, which supplies all of the region’s water, are expected to change in future as climate alters with rising global temperatures.

A new study that aims to support Lusaka and the surrounding region to integrate climate change into water management and planning, calls for more deliberate engagement between these competing sectors.

‘The city’s water needs, the demands of agriculture across the wider basin area, and the hydro-power scheme in the Kafue River, all intersect in terms of water management of the Kafue Flats Basin,’ explains Rebecca Ilunga, a civil engineer from the South African branch of the private engineering firm Aurecon. ‘Sugar cane is the main farming activity on the Kafue Flats, and it is expected to increase in areas upriver of the capital. This will draw more water off the river and impact on the volume of water further down the Kafue River, where Lusaka gets its water. But if the river level drops, this may also impact on how efficiently the hydro-power scheme on the river runs. Electricity from this scheme is central to pumping water from the river and delivering it to the city.’

Ilunga spearheaded a study, which looks at how Lusaka can integrate climate change into its water service delivery planning, and highlights the importance of greater collaboration between the different government departments that are responsible for these sectors.

Lusaka gets most of its water from the Kafue Flats Basin, with the city only drawing off about 5 per cent of the catchment’s capacity. There is enough water in both the river and the groundwater systems to continue to meet the city’s needs, according to Ilunga, even if the water in the river dropped significantly with increased demand from other sectors. The main risk to Lusaka’s water service delivery, even in the context of changing rainfall patterns due to climate change, is leaking pipe infrastructure, failing water treatment plants, which deliver adequate quality of water but can’t keep apace with demand, and a lack of coordination between different departments.

Ilunga’s study is part of a cross-disciplinary research project, Future Resilience for African Cities And Lands (FRACTAL) under the Future Climate for Africa program, a multi-country effort that aims to support African governments with useful and locally tailored climate information to inform better development planning. 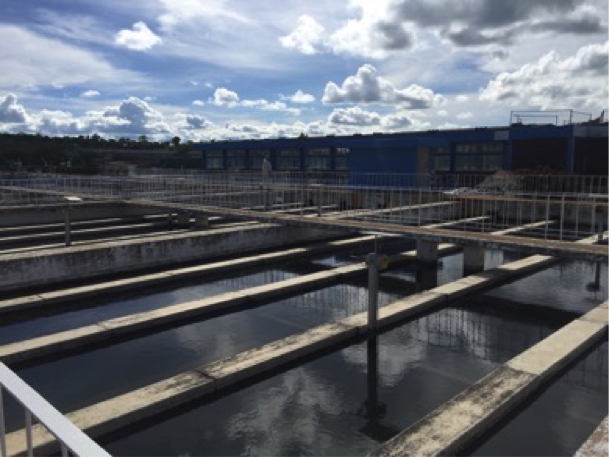 A third of Lusaka’s water is from the formal water system, drawn off the Kafue River through a water treatment plant like this. (Source: Rebecca Ilunga)

About a third of Lusaka gets its water from the formal municipal supply, which is drawn off the Kafue River and cleaned up in municipal treatment plants. This is pumped through to the city with electricity supplied by the hydro-scheme on the river. The rest of the city gets its water from a variety of formal and informal sources: small kiosk traders, which gets its water from state-operated boreholes and dispenses it to people who collect it with their own water containers; back-yard boreholes; informally dug wells; and water drawn directly off the river informally (meaning not through the state’s municipal treatment plants). Changes in rainfall, and the amount of water drawn off the river system by agriculture and the city’s formal water system, will impact on the quality and amount of water, which this group of ‘informal’ users is dependent on. 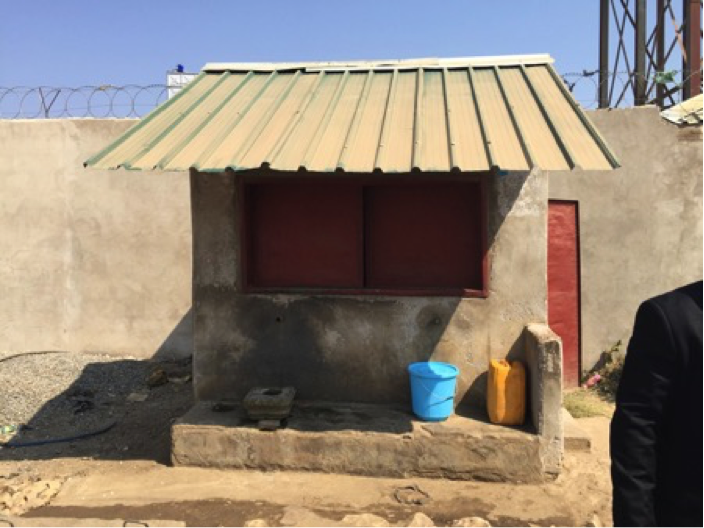 Two thirds of the people living in and around Lusaka, Zambia, collect their water from state-run and private boreholes, water kiosk traders, or informal wells dug in back yards. (Source: Rebecca Ilunga)

When it comes to planning and managing Lusaka’s water security in future, the city needs to take these potentially competing interests into consideration, explains Ilunga.

‘Usually, when water planners want to take climate change into consideration, the process involves running climate change modelling projections across the wider basin catchment, and then seeing how that will impact on water availability and recharge on the ground,’ explains Ilunga. ‘But we chose a bottom-up approach for this study. We looked at who the main water users are in the Kafue Flats Basin area, where they are getting their water from within that system, and then considered how climate change might impact on them.’

This bottom-up approach is a novel way of shaping water management decisions and planning, according to Ilunga, and helps better anticipate the potential trade-offs as different sectors potentially compete for the resource.

One of the outcomes, is a series of risk assessments that draw together future possible water use demands with likely changes in water recharge in the system as rising temperatures globally shift the region’s rainfall patterns. The study also drew some of these findings together in a series of policy briefs, which look at the risks associated with declining ground water levels, the health and water security threats associated with groundwater pollution linked mostly with informal pit-latrines used in parts of the city, and how the city can prepare for increased flooding.

Ilunga’s analysis finds that the Kafue River Basin’s water seems fairly secure in the short-term, in spite of the likely regional changes in climate.

‘Climate change will impact on the area indirectly, though, in terms of driving migration and shaping how the city develops,’ she says.

*Future Climate for Africa (FCFA) is a cross-disciplinary, multi-country research and development partnership that aims to generate fundamentally new climate science focused on Africa, and to ensure that this science has an impact on human development across the continent. The work reported on in this story is part of the Future Resilience for African Cities and Lands (FRACTAL) research group which aims to support decision-makers to integrate this knowledge into climate-sensitive decisions at city-regional scale.

This article was written by Leonie Joubert and is part of a series that delves into the science that has been produced by various FCFA projects, and introduces some of the people behind it.
Menu