Farmers in the semi-arid Sahel region of West Africa have domesticated strains of pearl millet in a way that has made these ‘landraces’ ideally suited to the specific growing conditions of the region.

A landrace is a domesticated, locally adapted, traditional variety of a species of animal or plant that has developed over time, through adaptation to its natural and cultural environment of agriculture and pastoralism, and due to isolation from other populations of the species.

Seed sharing between farmers and seed selection over many generations has been central to adapting the genetics of this crop to the hot, dry climate here, and its nutrient-poor soils.

Preserving and sharing the genetic diversity of these landraces will be key to helping farmers across the Sahel be more resilient as the climatic conditions here become hotter and more drought-prone in future. Farmers who are growing millet in areas where conditions are likely to be less suited to the crop in future will be more in need of genetically diverse landrace seeds if their cultivation is to remain viable. This is according to new research from IRD (French National Research Institute for Sustainable Development),  the University of Montpellier (UM) in France, and the Senegalese Institute of Agricultural Research (ISRA) who have been working together through AMMA-2050 part of Future Climate for Africa.

However, seed sharing in future will need to involve greater state cooperation across the region, rather than relying solely on local-scale farmer network exchange, as has been done until now.

Historically, the vast majority of seed exchange in the region has been done between farmers at a local scale, says Dr Adeline Barnaud from the IRD.

‘These exchanges are not by chance,’ she says. ‘Many studies have shown that seed exchanges are made within the framework of a relationship of trust, such as between family and friends, and within the same ethnic group.’

Although there are examples from history that show the role of wider regional migration and seed exchange, such as amongst Bantu-speaking people in sub-Saharan Africa, whose longer-distance migration resulted in the spread of sorghum. Another example is how African rice spread to South America after it crossed the Atlantic Ocean and was imported into that region through the slave trade.

‘Our research in the Sahel shows that the mobilization of genetic resources will have to take place at much larger scales, across administrative or ethnic boundaries,’ explains Barnaud. 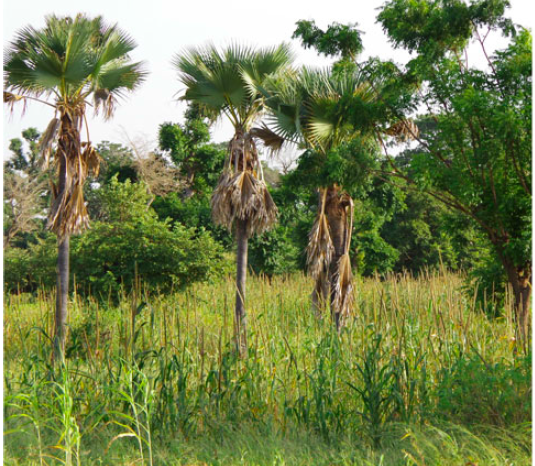 A pearl millet field in Senegal (A. Barnaud, IRD)

A multi-disciplinary team of AMMA-2050 researchers based at ISRA and the IRD looked at the genetic diversity of 173 pearl millet landraces farmed across 10 different countries in the Sahel region, and mapped their distribution against the current climatic conditions in which they occur. Researchers used millet for this mapping exercise, since it is an important and nutritious staple crop that is well adapted to the semi-arid and nutrient-poor soil conditions of the region.

‘We found that the northern edge of the current areas of cultivation of both early and late flowering (millet) varieties are most vulnerable to climate change,’ FCFA researchers wrote in their study which was published in the journal Nature Communications in October 2020. 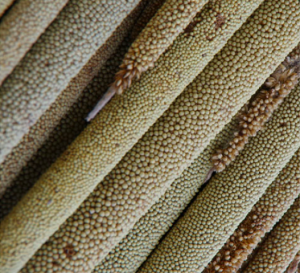 Spreading seed and preserving crop genetic diversity will need to extend beyond community-led seed exchanges. It will call for a coordinated regional cooperation between governments and agricultural institutions as well.

How this happens at a practical level is complicated, however, as Barnaud explains.

There are different regulatory systems for the use of genetic resources, including the United Nations Food and Agriculture Organization’s International Treaty on Plant Genetic Resources for Food and Agriculture (ITPGRFA) and the Convention on Biological Diversity’s Nagoya Protocol on Access and Benefit-Sharing.

‘Crop genetic resources are essential resources both for the farmers who cultivate them, and also as raw material for research on plant breeding. There are therefore issues of sovereignty over these resources that generate tensions.’

The FCFA research shows the importance of feeding the questions of governance of genetic resources to the necessary state institutions. Another issue which the research raises is that of the function of gene banks, and how farmers can benefit from this method of conserving seed.

‘The role of gene banks is not to distribute seed diversity to farmers, but rather to conserve and make this material available for public or private research,’ says Barnaud. ‘What is missing, therefore, is a link so that the diversity of farmers’ varieties is accessible to all.’

When landrace seeds are collected from farming communities and conserved by researchers or agricultural institutions, they often lose their names and regional identities, are made anonymous, and then re-distributed just as a numbered crop seed.

This needs to change, say AMMA-2050 researchers. Farmers need to be recognized for their role in the existence of landrace seed diversity.

‘Peasant communities are mobilizing more and more for the use and preservation of farmer varieties, through international seed fairs that allow, for example, an exchange of varieties in West Africa,’ says Barnaud.

The study shows the that current genetic resources identified at sites in today’s conditions can be adapted to future conditions at other sites in West Africa.

‘Farmer varieties that are currently cultivated are a key resource for the future. This study shows the importance of allowing in-situ conservation of seed diversity so that it continues to evolve and remains accessible,’ Barnaud concludes.

This article was written by Leonie Joubert as part of a series covering the science produced by various FCFA projects, and introduces some of the people behind it.
Menu