Imagine a board game, a bit like Monopoly, but where the board design shows the layout of farmers’ fields. Each ‘cell’ in the playful graphics show the footprint of the farmlands, the soil type that farmers have to work with, and what equipment they have on hand.

The players who are seated around the game are real-life farmers from the West African country of Senegal, and as the game progresses, it throws up situations that prompt the participants to make certain choices: do they want to farm with livestock, or crops, or a mix of the two? How do they want to allocate resources such as their labour or cash? If the farmer draws a ‘climate card’, this means their farm gets rain that season, this will impact on their harvest later in the game and how much money they exit that round with.

Once the harvest is in, the farmers then choose what to do with it: keep some of the crop for their families to eat, sell it on the local market, or pay off some debt? If the harvest isn’t enough to float the family enterprise through another season, farmers may choose to sell some livestock, or ask other players for help.

As the game unfolds, a group of academic researchers documents the whole process, with the farmers’ consent. They note each farmer’s choices, the conversations they have as the game progresses, and how each reacts to game options and how participants interact with one another. 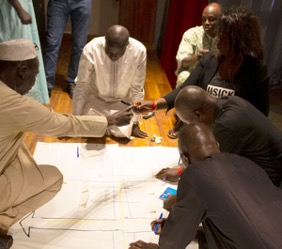 Farmers use the Plateau Game to understand how climate change could impact their crops.

The researchers part of Future Climate for Africa (FCFA), have been working in different regions of sub-Saharan Africa to better understand how rising global temperatures will shift the climate in various regions around the continent, and how countries and communities should respond.

Building new climate knowledge to support the agricultural sector has been a key FCFA focus. Using novel research processes, such as the Plateau Game, FCFA is better able to understand how farmers in West Africa make agricultural and land management decisions, and how climate events influence their decision making.

The climate information that resulted from this collaboration with Senegalese farmers is now being used to improve the design of models, as well as help government policy makers and agricultural professionals and practitioners who support farmers in the region.

While the new climate information itself is important, equally significant has been the process of information gathering itself, used by FCFA through the programme.

FCFA’s process involved collaborations between researchers, practitioners, governments, communities and other stakeholders, in different climate-impacted sectors and across the sub-Saharan African region, in order to explore different ways of collective knowledge-building. The aim was to develop novel and useful climate information that can continue to inform policy making and planning in response to regional climate change. But the approach was to develop this knowledge in close collaboration with governments, practitioners and other stakeholders on the ground.

Co-producing knowledge in this way has several benefits where “it tailors climate information to a specific context so it is more likely to be relevant to the user of that information” indicate the authors in a policy brief outlining the role of this collaborative approach. ‘This approach also supports wider reach and impact through multiple communication channels, and promotes joint ownership and integration of climate information into actions, plans and budgets.’

Another innovate approach used in Senegal’s agricultural sector was a participatory theatre forum. African and European FCFA researchers teamed up with a troupe of West African actors to put on a theatre production for a very specific audience: farmers, local and regional government representatives with an agricultural portfolio, and civil society. The performers acted out a play that captured the typical challenges and experiences of different stakeholders in West African farming. But it was what happened after the performance that mattered. With the storyline providing a primer, the FCFA team facilitated a discussion amongst the audience members, to see how they had engaged with the storyline and what their needs were within the farming sector. 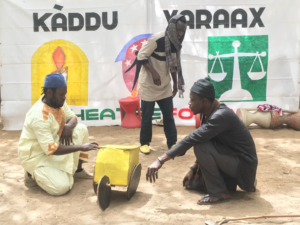 Actors perform as part of the Theatre Forum.

The aim was to overcome the power dynamics that might otherwise block different agricultural stakeholders from interacting freely. Researchers explained that the theatre forum was to allow a freer exploration of different perspectives and experiences that people in the sector might face in the context of climate change. What were their common interests, or the conflicting agendas and ambitions of scientists working in this sector, the government officials, policy makers, and the farmers themselves? What were the different issues that impacted on their decisions in the context of how to adapt to future agricultural conditions?

The FCFA programme was designed to create a step-change in climate science on the African continent, to test novel approaches such as these co-production methods, and influence real-world problems. FCFA and the Weather and Climate Information Services for Africa (WISER) have produced a manual describing the methods and principles for knowledge co-production, so that other practitioners can apply similar methods: A manual for co‑production in African weather and climate services is available for download from the FCFA website, and includes useful case studies drawn from FCFA’s experiences in implementing these methods.