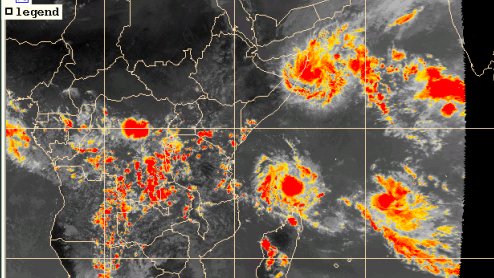 The 8th tropical cyclone of 2019 in the North Indian Ocean made landfall on Saturday 7th December. There haven’t been more than seven tropical cyclones in a season since 1976. Cyclone Pawan weakened as it moved over the northern tip of Somalia, but some devasting impacts were still felt. There have been at least two reported deaths so far, as well as damage to houses, roads and communication lines.

Concurrently, two other tropical cyclones, Belna and Ambali, were sat in the South-West Indian Ocean. Belna made landfall on the 9th December over northern Madagascar, bringing strong winds and rain. The Red Cross estimate that 260,000 people were at risk. These comprise the first two tropical storms of the South-West Indian Ocean Cyclone season, which runs until 30th April 2020.

Responding to and preparing for such severe weather events is obviously vital, and at such times it can seem distracting to consider the effects of climate change that will occur 30 years from now. Very often though, preparing and understanding weather now and weather in the future are two sides of the same coin, both scientifically and in practical terms. For example, the current case in the Indian Ocean reflects many processes revealed in a recent HyCRISTAL research article, which considered events over a much longer timescale of the past 40 years.

The HyCRISTAL research project informs long-term decision making using our knowledge of what East Africa’s climate will be like many years from now. It is often knowledge of the extremes of future weather, rather than simply “future climate” that is key to informing such decisions. To understand future extremes though we must understand the present, and such understanding in turn benefits weather prediction and disaster response, an essential component of preparedness for climate change. Similarly, actions taken now to increase the resilience of both infrastructure and society to extreme weather events can benefit societies many years from now, when we expect flash-flooding from extreme rainfall to have increased further. 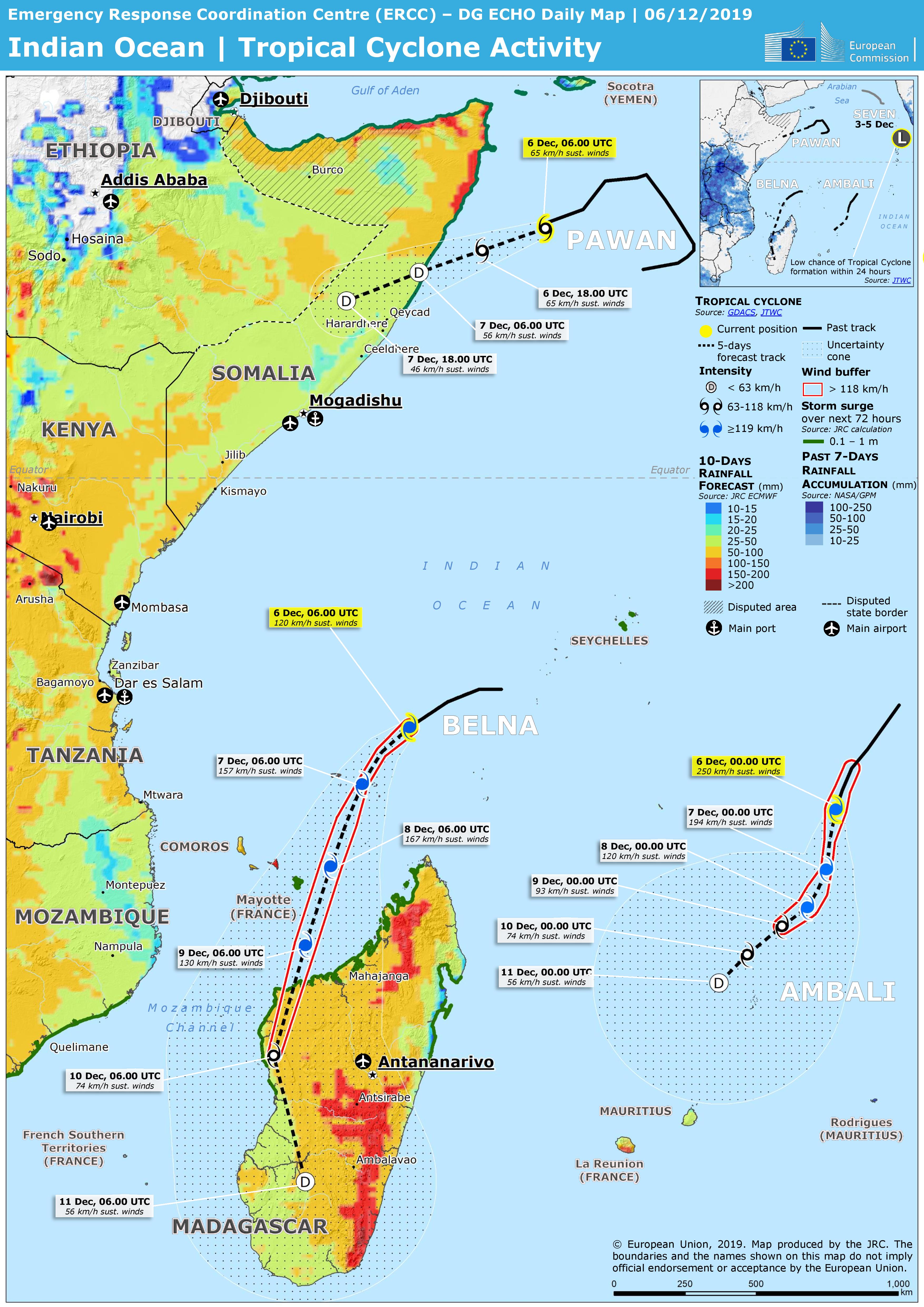 The present conditions in the Indian Ocean are favourable for cyclone formation because sea surface temperatures in the western Indian Ocean are particularly warm, as the Indian Ocean Dipole (IOD) has entered an unusually strong positive phase. This positive phase of the IOD is known to bring enhanced rainfall across Eastern Africa, and there have been damaging impacts from heavy rain in Uganda, Tanzania, Kenya, Ethiopia and Somalia over the past few months, with hundreds killed and millions affected. 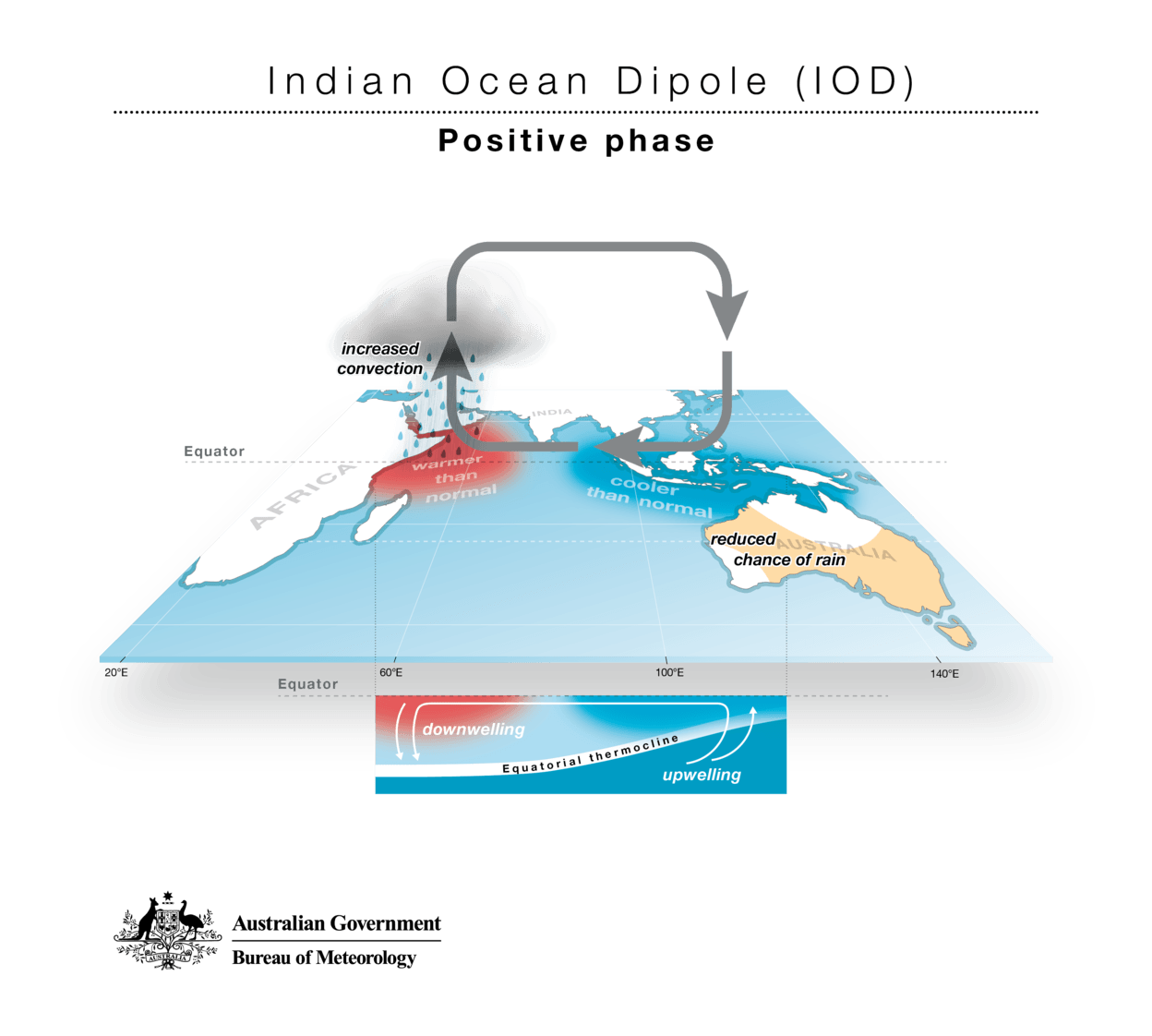 In addition to warm sea surface temperatures, an oscillation within the atmosphere which enhances convective activity, called the Madden-Julian Oscillation (MJO), has been present over Africa and the Indian Ocean at times over the past few months. Research has shown that when the MJO is in this state it can enhance rainfall over East Africa and increase the chance of cyclone formation and intensification over the Indian Ocean. Recently, the MJO has been quite weak, so it is therefore likely the anomalously warm ocean temperatures have been necessary to have such an unusual number of cyclones form. Other tropical waves, originating from convection in the central Indian Ocean may have contributed to cyclone formation.

The effect of the IOD on enhancing rainfall in Eastern Africa during the short rains (October-December) has been established for some time. Recently, we have shown that rainfall across the Lake Victoria basin can also be enhanced when there are westerly winds from the Congo, or a weakening of easterly winds from the Indian Ocean. We showed that, for the long rains (March-May), these conditions form more readily in the presence of the MJO and tropical cyclones over the Indian Ocean. And indeed, over the last few weeks there have been westerly anomalies across equatorial Africa. This combination of effects also occurred in the 2018 long rains, which was the wettest long rains on record for much of the region.

Somalia, the Comoros and Madagascar are already feeling the direct effects of Cyclones Pawan and Belna. Earlier in 2019, Cyclones Idai and Kenneth demonstrated how Mozambique and Tanzania can also experience the devastating direct effects of landfalling tropical cyclones. Eastern equatorial African countries, such as Kenya, will not experience such direct effects because cyclones cannot form and be maintained close to the equator. However, through the formation of anomalous equatorial westerlies as described above, the passage of tropical cyclones is still important for equatorial African weather.

Further research is needed since the indirect effects of cyclones on equatorial Africa are complicated. Cyclone Idai in March 2019 coincided with a delayed onset of the rainy season and lower rainfall, while Cyclones Dumazile and Eliakim in March 2018 were associated with enhanced rainfall. In our recent work we pointed to the location of the cyclones as a key factor in these effects. Cyclones to the east of Madagascar seem, on average, to lead to equatorial westerly winds and enhanced rainfall. Meanwhile, cyclones in the Mozambique channel do not often coincide with the formation of westerly winds over the equatorial region studied.

We have also recently shown that it is the variability in the onset, as well as the cessation, of the long rains that was behind the decline in the East African long rains between the 1980s and the 2000s. This decline corresponds to changes in large-scale patterns of sea surface temperatures and atmospheric pressure. Many negative impacts came from this decline, and therefore further research is imperative if we are to understand the role of relatively short time-scale events, such as tropical cyclones, on year-to-year variability in East Africa rainfall.

Finally, global warming is expected to lead to more intense tropical cyclones because of the increased sea surface temperatures, and evidence that warmer sea surface temperatures are leading to increased formation of tropical cyclones further south in the Indian Ocean than in the past. Furthermore, climate model projections show enhanced warming in the north-west Indian Ocean under enhanced greenhouse gas concentrations. It is important for eastern African societies to prepare and expect changes in the frequency of the indirect and direct effects of intense tropical cyclones as a result of climate change. And it is important for research to explore in more detail the drivers of these effects and how they could respond to global warming in order to assist societies to adapt.

As extremes intensify under global warming, in many cases increasing resilience to the weather extremes we see now will help to prepare society for the large changes in weather to come.