GHACOF provides a unique forum for addressing such weather and climate-related risks. The virtual format enforced by COVID-19 related restrictions enabled a record-breaking 250 attendees, and much discussion, with positive feedback on the HyCRISTAL session led by Geoffrey Sabiiti (ICPAC) who said,

“The ongoing crises, together with the forecast that the Oct-to-Dec rainfall season will likely be drier than average, highlights the need for medium- to long-term planning and low-regret actions to address compound and sequential disasters as climate change related impacts increase, alongside action informed by early warning and disaster response.” 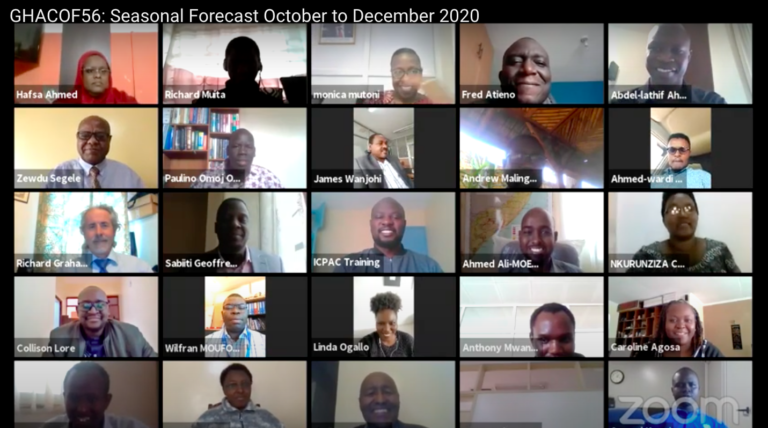 A screenshot of some of the participants from the virtual GHACOF56.

GHACOF56 was convened online on the 26 of August 2020 by the IGAD Climate Prediction and Applications Centre (ICPAC) in collaboration with HyCRISTAL and other partners to review the forecast performance over the previous season and issue the October to December 2020 rainy season forecast for the Eastern Africa region. The virtual event brought together climate services providers and users from key socio-economic sectors, governmental and non-governmental organisations, decision-makers, climate scientists, and civil society stakeholders to discuss both impacts and mitigation measures for the upcoming season, and in the longer-term from climate change.

Since October 2019 around 700 000 people have been displaced by floods in East Africa. Even though it is still unclear whether over the coming years climate change will lead to an overall increase or decrease in rainfall, key aspects of the recent intense rainfall that have generated the floods and supported locusts can be linked to climate change. 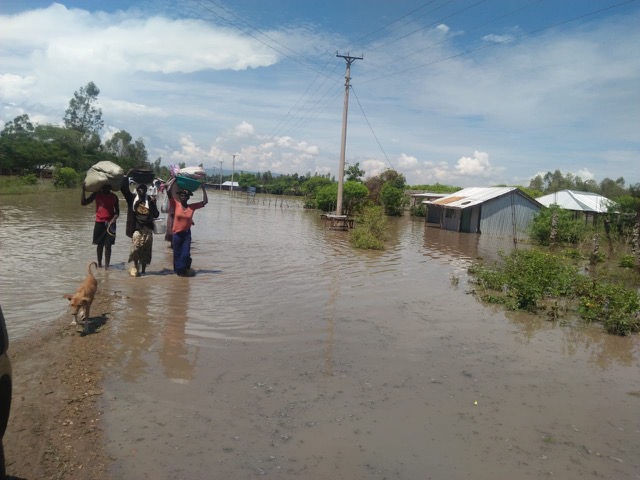 The seasonal forecast from ICPAC showed how a drier than average Oct-Nov-Dec short rainy season is likely, which is unfavourable for food production, and following on from the triple crisis around, 50 million people in  the eight IGAD States (20% of population) are now predicted to be  acutely food insecure by end of 2020. A drier season would, however provide some relief from the flooding events that have occurred from October 2019 to August 2020, and would be expected to terminate the reproduction cycle of the desert locusts.

In the long term, it is possible that climate change will enhance dry events such as those forecast as more likely than usual for the coming season, as well as enhancing events that generate floods, such as those seen in the last year. Collaborative actions to promote climate change science, sustainable adaptation and mitigation measures are required to support adaptive capacity and resilience in the region. John Marsham (HyCRISTAL Principle Investigator) noted, “HyCRISTAL looks forward to working with ongoing projects such as Strengthening the Resilience of the IGAD region to the adverse Impacts of Climate Change through effective Adaptation and Mitigation Actions (RICCAMA) project and GCRF Africa SWIFT to help inform the predictions, planning and actions on time-scales of hours to years that are so urgently needed”, and in his address to the forum, the RICCAMA Project Manager, Philip Omondi, affirmed that RICCAMA will build on the foundation already laid by HyCRISTAL on climate change in the region.

Watch the recording of GHACOF 56: Seasonal forecast October to December 2020.  This article was written by John Marsham.
Menu