The number of intense thunderstorms over the Sahel region of West Africa has tripled since the 1980s, contributing to an overall increase in annual rainfall in the region. This is caused by rising temperatures in the Sahara, which are driving more thunderstorm activity over the Sahel.

The Sahel is a 1 000km-wide band of semi-arid country that sits between two environmental extremes — the Sahara Desert, and the tropics — and straddles the continent from Senegal on the Atlantic coast, to Eritrea on the Red Sea.

Atmospheric scientists at the UK Centre for Ecology and Hydrology (UKCEH) near Oxford in the United Kingdom showed in 2017 that as the Sahara gets warmer, it increases the temperature gradient between the desert in the north of the Sahel, and the cooler, forested tropics thousands of kilometres away along the West African coast. This growing temperature difference causes monsoon winds to move further inland from the coast, and speeds up the prevailing high-altitude winds that drive weather patterns across this part of the continent.

‘The result is an increased change in wind speed and direction with height, so-called “wind shear”, which helps storms to grow, and has made them more intense over the last decades,’ says atmospheric scientist Dr Conni Klein, who is based at the UKCEH.

Most of the thunderstorms that bring intense rain over the Sahel during the monsoon season measure more than 100km across. Klein explains that these storms can live for many hours and sometimes even days. As they travel, they may cause heavy flooding along their path.

Scientists have long understood the main physical forces that create thunderstorm conditions over the Sahel, such as how a greater temperature gradient between regions drives increased wind shear and storm formation. What they haven’t understood well until now is how the local conditions on the ground in the Sahel feed into these atmospheric conditions.

New findings from UKCEH now show that large areas of hot, dry sand in the Sahel contribute to the atmospheric conditions that shape the behaviour of these thunderstorms.

‘We knew that these thunderstorms tend to form at the boundaries of patches of dry soil as small as 10km,’ explains Klein. ‘What is new in this latest research is that we can now show that once these big storms are formed, and are large and moving, local surface conditions still continue to affect them.’ 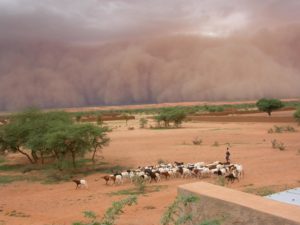 This discovery will not only allow for better short-term weather forecasting in the Sahel, reseachers say, but may improve forecasting in other parts of the world which are affected by organised storms and where similar land and atmosphere interactions occur. Other similar regions include Argentina in South America, the Great Plains in the United States, in parts of southern Africa, India, and northern Australia.

Improved forecasting will also assist with better disaster preparedness ahead of high-risk storms that may result in flooding or wind damage.


Zooming in on the Sahel’s soils

Thunderstorms need a combination of heat and moisture in order to form and survive.

Over the Sahel, the atmosphere is often already primed with moisture from monsoon circulations reaching inland from the Atlantic ocean. This allows thunderstorms to begin taking shape. Dry soil conditions further contribute to these storms living longer and becoming more extreme.

Dry, sandy areas that are typical of conditions in the Sahel tend to warm up in the late afternoon as part of the normal daily warming cycle. The warming is more pronounced over drier soils, since there is little moisture to evaporate, which would otherwise help cool the surface and the surrounding air. This results in warmer air in the afternoon that more readily rises into thunderstorms that are already on the move, feeding into the atmospheric conditions that help sustain the storms.

The UKCEH now shows the extent to which soil conditions feed into this.

Klein and her team used satellite data gathered across the Sahel during the rainy seasons — from June to September, in the years 2006 until 2010 — and tracked thunderstorm activity. They also looked at what soil conditions were across an area of about 600km by 600km ahead of the storms’ arrival.

‘We found that soil conditions ahead of the majority of storm cores were distinctly dry, with an afternoon temperature spike. Dry soil patches as small as 100km to 200km across can have an effect on mature storms,’ Klein explains.

Once formed, storms can live for a few hours, or several days. These findings give a better understanding of the extent to which warm, dry soils affect how long these storms live, where they might be going, or how much momentum they gain.

‘This will allow weather forecasters to better predict how thunderstorms behave once they are formed,’ says Klein, whose findings were recently published in the journal PNAS. ‘Forecasters will be able to get better predictions of whether storm will vanish and die, or become larger and more extreme, using soil condition information from areas ahead of the storm core.’

Improved storm forecasting will allow for early warning predictions and disaster readiness, ahead of storms that could result in severe flooding or winds, all of which can threaten infrastructure and lives.

Researchers are planning to test how these findings can be used operationally to improve forecasting in the region, and are working with meteorological services in Senegal to develop tools that will allow these new data sets to be included in their current forecasting methods for the upcoming rainy season in 2021, says Klein.

‘This trial will allow us to compare storm forecasts that are produced with this new information, with the actual storms as they occur in reality.’

The work reported on in this story is part of the AMMA-2050 (African Monsoon Multi-disciplinary Analysis 2050) research project with Future Climate for Africa*, which aims to support decision-makers in West Africa to integrate this knowledge into climate-sensitive decisions.