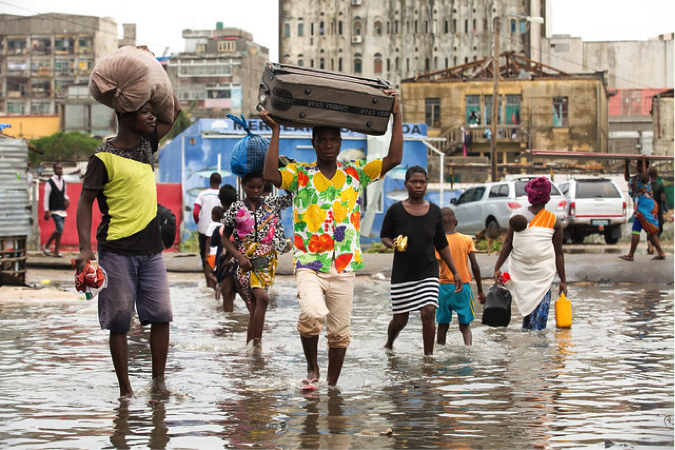 The first hurricane-strength storm to be recorded in Mozambique made landfall last week in the north of the country, less than a month after Cyclone Idai wiped out an estimated 90 percent of the infrastructure in the coastal city of Beira, about 1 000 km up the coast of the country’s capital, Maputo, in March.

But the arrival of these two record-breaking tropical storms has given international disaster risk advisers and humanitarian aid organisations a rare opportunity to test a flood forecasting method that allowed response teams to pre-empt which areas would be worst hit by flooding and deploy relief operations ahead of the arrival of Cyclone Kenneth on Thursday 25 April.

By 23 April, weather forecasts had already alerted the Mozambican government, United Nations disaster response teams and aid organisations that Cyclone Kenneth was brewing over the Indian Ocean. Disaster risk management researchers in the UK were then able to draw this weather information together with a flood forecasting process, and overlay this onto topographical maps, which show floodplains in the region. They then matched this with census maps, which show densely populated areas in relation to those high-risk areas to produce a flood hazard map.

This allowed them to identify communities lying in the path of the storm which were most likely to experience severe flooding as a result of the heavy rainfall, two days before the storm made landfall.

The work involved the collaboration of teams from the University of Readings’ Geography and Environmental Science unit, Bristol University’s School of Geographical Sciences, and the European Centre for Medium-Range Weather Forecasts (ECMWF). Between them, they monitored the flood forecasts for the region looking ahead by 30 days, and drew up flood hazard maps, which estimated the number of people likely to be impacted during that time. This was passed on to the UK Department for International Development (DFID) and humanitarian aid teams who were already on standby in Mozambique.

With this information, response teams were able to start deploying personnel and resources more strategically ahead of Cyclone Kenneth’s arrival last Thursday evening.

‘With Cyclone Kenneth, it was the first time we’ve been able to use this kind of flood forecasting in a way that has helped disaster management teams respond in anticipation of the arrival of an event like this,’ explains Philip Rundell, an early warning risk and preparedness adviser with DFID.

The flood forecasts were updated every morning even as the storm made landfall, and were followed by flood hazard maps, which were produced within three to five hours after the original forecasts being released, according to DFID.

As the cyclone settled over northern Mozambique, these flood hazard maps were compared with satellite imagery which captured the actual flooding, allowing researchers to verify how accurate their hazard maps are.

Supporting humanitarian aid after Idai, and before Kenneth

The flood modelling and flood hazard maps were instrumental in helping with operational responses to the humanitarian crisis after Cyclone Idai hit Beira in March.

‘Once Cyclone Idai made landfall, it was clear that weather forecasts alone were not going to be enough to understand the extent of the flood risk,’ explains DFID climate science adviser, Dr Rosalind West. ‘DFID, the teams from the Universities of Reading and Bristol, and ECMWF were able to produce real-time scientific mapping of flood risk to help inform the humanitarian response. These flood forecasts and flood hazard maps helped identify where, for how long and when flooding may occur or worsen, as well as where people may be impacted.’

Beira became the hub for humanitarian response in the wake of Idai, because it was the largest city close to the eye of the storm and the most densely populated area. Disaster response involved clearing the air field there, bringing in fuel and supplies, and mobilising teams on the ground. 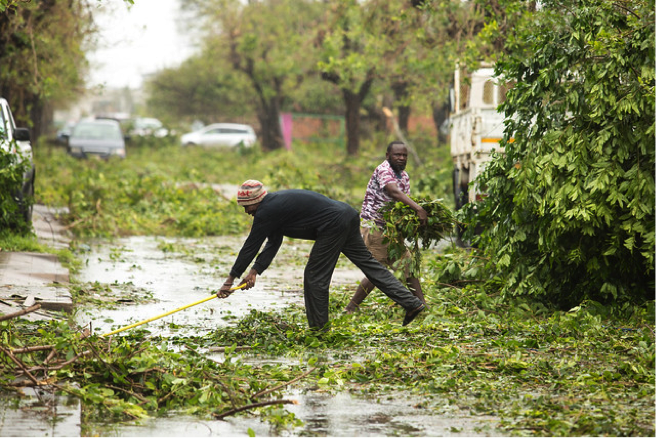 The modellers were then able to identify communities in a radius of about 300 km around Beira that were most likely to be at risk of flooding, without needing to have eyewitness reports from people in the field to confirm which areas were most in need of support.

When Cyclone Kenneth began building over the Indian Ocean, the flood forecasters took the process a step further, drawing up a flood risk map ahead of the storm’s arrival that helped identify communities at risk and who would most likely need humanitarian support once the storm arrived.

This is particularly important, explains Rundell, when it comes to getting aid to more remote communities, who might be far away from areas that are well covered in terms of damage assessment.

‘From an operational perspective, the forecasting ahead of Cyclone Kenneth showed us that the storm was going to hit the Cabo Delgadoprovince, far north of Beira where Cyclone Idai made landfall,’ explains Rundell. ‘The flood risk map showed us where and when key rivers were likely to peak and the locations of the most at-risk populations. Knowing that about 700 000 people were likely to be impacted across the region, this specific information helped preparations and inform more targeted response planning.’

The flood risk information was shared with humanitarian response teams who were already on the ground to begin moving in supplies, get air assets like helicopters on standby, and begin to deploy the shelter, food, and clean water supplies to the communities who were most likely to need it once the flooding started.

Professor Hannah Cloke, a specialist researcher in flood forecasting and disaster management at Reading University, says the flood forecast modelling used in this process has been in development for 15 years. However these two cyclones were the first chance to stress-test the process of getting these flood hazard maps and supporting information directly to first responders on the ground during and even ahead of the arrival of tropical storms of this magnitude.

The flood forecasting process, known as the Global Flood Awareness System (GloFAS), produces global daily flood forecasting for all the big river systems around the world. According to Cloke, it takes weather forecast data four times a day, and produces daily river flow forecasts for each of the world’s big rivers. This is part of the European Commissions’s Copernicus Emergency Management System.

‘We do one forecast for the upcoming 30 days. And then we do seasonal forecasts,’ explains Cloke.

The daily short-term forecasts are published on the EU’s Copernicus website and are freely available for anyone to access.

The seasonal forecasts are published once a month and will, for instance, show in an El Nino year which major river areas around the world might be wetter and more likely to experience flooding in the forthcoming season.

With Cyclone Kenneth, the weather forecast indicated that the storm was due to make landfall by Friday 26 April, and the disaster risk advisers were able to supply the flood risk map two to three days ahead of the event.

The news service Accuweather reports that Cyclone Kenneth is the first hurricane-strength tropical storm to hit Mozambique in six decades of record keeping. The UN’s World Food Programme warned Cyclone Kenneth was expected to bring twice the amount of rain that Cyclone Idai had brought to Beira in March, and that ‘violent flooding’ was likely to occur in and around Pemba. By Sunday 28 April the first news reports estimated that three people had died in the storm, however the full extent of the damage has yet to be assessed.