Africa is one of the most vulnerable continents to climate variability and change due to both its high exposure and low adaptive capacity. It is important to increase the understanding of climate change amongst communities. However, climate change is a complex issue to communicate, with many journalists struggling to report on climate change in a language that is accessible but doesn’t lose the scientific rigour.

There are very few opportunities for African journalists to receive funding and mentorship on how to successfully report on climate change issues. “Much of the funding that we get in terms of science issues in Africa is mainly for health issues but we do not usually get funding to directly cover climate change and environmental issues”, shared by one of the  participating journalists, Sophie Mbugua. Therefore, it is important that African journalists are trained and mentored so that they can report on these issues accurately and responsibly to ensure greater understanding  and climate action amongst communities. Recognising this gap, FCFA sponsored 10  African journalists to be part of an African reporting programme with Climate Home News (CHN)  from June 2019 to  March 2020. 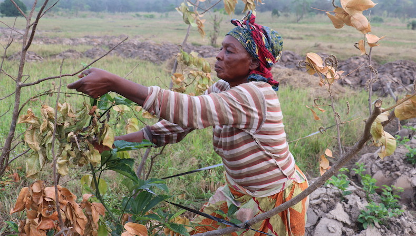 Elizabeth Ukah says small holder farmers in Nigeria are frustrated with mounting losses resulting from the variability of weather – A story by Orji Sunday.

What was the African Reporting Programme?

The aim of the African reporting programme was to improve the capacity of African environmental journalists to report on and engage with stories that links African development with climate science and climate information services. A call for applications was shared widely within FCFA and CHN networks to ensure a range of applications from journalists across Africa.

10 journalists from 8 African countries were successful in their pitching and selected to be part of the African Reporting Programme. They were  provided with one-on-one support and guidance from CHN’s commissioning seasoned editors. These editors worked with the journalists over email or via phone to map out a reporting plan, with travel if necessary. Together, they  discussed how to structure the story from the material gathered and typically edited the copy over 3 or 4 drafts, carefully explaining the changes to make sure the stories were fit for publication. The close contact with the editors and experience of the stage-by-stage process helped  improve the journalists reporting and writing skills but also provided valuable experience in how to  pitch to international outlets in the future. 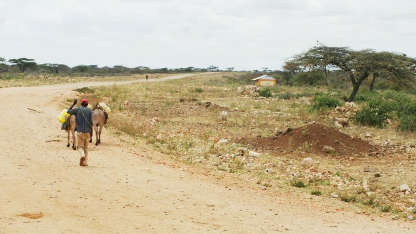 A Merti resident in Kenya makes the long journey in search of water, as access to clean and safe water is one of the greatest challenges in his community – from a story by David Njagi.

The journalists  produced 10 environmental stories that were published on the CHN website. By April 2020, the total page views of the stories was over 38 000, reaching readers spanning the globe all the way from London to Lagos and many others. The most popular story, with more than 26 000 views, was “Two million in Zimbabwe’s capital have no water as city turns off taps” by Sophie Mbugua from Kenya. This story highlighted a common problem across Africa, the issue of water scarcity which is likely a result of prolonged droughts. Sophie also gave insights on dam rehabilitation and construction projects aimed at alleviating water stress in Zimbabwe.

The impact of the reporting programme on journalists

Overall, the African Reporting Programme presented a valuable opportunity for journalists to be  trained and mentored to report on the local and underlying stories that relate to environmental and climate change issues in their regions. For example, Linus Unah (Nigeria) wrote a story on the erosion crisis in Nigeria, which highlighted how climate change is aggravating an erosion crisis that is currently wrecking buildings, roads and farmland. “The African Reporting Programme  presented a huge opportunity for me, as I was able to get funding that I needed to get in the field and [report on] the story. It was very exciting because I got to travel to about 5 states across Nigeria, and see the erosion crisis at first hand and learn from people that are affected”, said Linus.

Journalists were able to look more deeply into the local issues of climate change from an African perspective. “The fact that we were working with CHN and the organisation like FCFA that solely focuses on climate change made it easy to play-off the climate angle”, said Linus. The journalists were also able to learn from and work with CHN editors who helped shape the focus of their stories. “I collaborated very well with the editors I was working with. They suggested a lot of scientific factors that I added into my story, which was very valuable”,  shared Madalitso Kateta (Malawi).

Being part of the programme that heavily focuses on climate change also exposed the journalists to many different opportunities. The journalists were and are still able to engage and work with a number of local key players within the climate community, including some of the FCFA researchers as well as other media outlets. “National geographic reached out concerning gaps on African scientists participating in the UNFCCC process and their funding opportunities for climate change reporting that I am currently exploring. Additionally, I got an opportunity to speak to learners in a local school about the issues of climate change in Africa. Being part of the programme also strengthened the relationship I have with FCFA. They funded me to go to COP25  for one week. Before that, I attended the FCFA African Climate Risk Conference in Addis Ababa”, said Sophie. 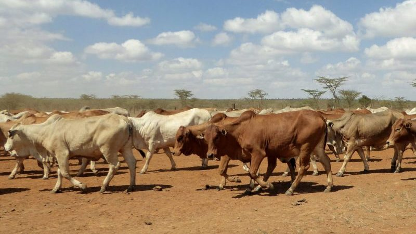 Pasture for cattle is in short supply following drought in Laikipia County, Kenya. This has sparked local conflict – from a story by Leopold Obi.

A lot of African environmental journalists can benefit if such a programme is sustained, particularly freelancers who need the funding to write important as well as impactful stories. A few journalists who participated in the programme  expressed that in the future it would be valuable to see such fellowships collaborate more with African editors and media. This will empower African media outlets to report on African climate change impact stories. “The inclusion of local African publishers could be a plus because the process of pitching to an international media outlet is different as they look for stories that can make global headlines. Whereas if they could include local media outlets there could be issues that can make it to the international media but also make sense to the local media and people in general”, said Madalisto.

The programme encouraged stories from a region that is often hard to attract content. The quality of the published work was on the whole high particularly due to the editorial support and training. This should put the journalists in a stronger position when pitching to both local and international outlets in the future.

This article was written by Luleka Dlamini.
Menu