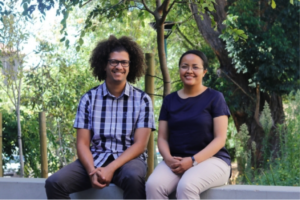 Dr Izidine Pinto and Dr Rondrotiana Barimalala both are co-authors on the next IPCC report.

City-level officials and politicians inadvertently find themselves at the coal-face of responding to changing climatic conditions, as temperatures around the world continue to climb in response to rising carbon pollution in the atmosphere. It is therefore critical to provide these government officials and technocrats with reliable climate information that is easily digestible and can be integrated into their planning and policy making.

Dr Izidine Pinto, a Mozambican climate scientist currently working with the Climate Systems and Analysis Group (CSAG) at the University of Cape Town (UCT) in South Africa, has spent the past two years trying to do just that.

Pinto has worked with a team of academics in Africa, the UK and Europe to take science relating to the likely impacts of changing rainfall and temperature patterns on different cities in sub-Saharan Africa, and whittled this complex information down into digestible fact sheets, policy documents, and scenarios written out in a narrative format which can be useful to city-level decision makers.

‘In a case like Maputo, for instance, we take the information from global and regional climate models, analyse their outputs, and extract information for city officials,’ explains Pinto. ‘Maputo is a low-lying city, and when it rains, this often results in flooding and landslides. This has a huge impact on infrastructure like roads and schools. The models tell us if rainfall patterns in future will change. It’s important for the city to know this, so they can prepare for future conditions.’

This work has been done as part of the Future Resilience for African Cities and Lands (FRACTAL) research consortium. FRACTAL describes itself as a trans-disciplinary group of researchers from partner organisations around the world, which aims to advance scientific knowledge about regional climate responses to human activities. The climate information they produce is geared towards supporting ‘resilient development pathways and enabling decision makers to better integrate pertinent climate knowledge into their resource management decisions and urban development planning’.

Pinto grew up in Zambezia, a province in central Mozambique, and studied meteorology at University Eduardo Mondlane in the capital, Maputo. He then moved to UCT where he now holds a post-doctoral fellowship position at CSAG and began working with the FCFA team in 2017.

While working here, he was nominated to the Intergovernmental Panel on Climate Change (IPCC) to be part of its global body of climate science assessors.

Every seven years, the IPCC publishes an overview of the current science which lays out the extent of carbon pollution buildup in the Earth’s atmosphere, the impact this has on global temperatures and the climate system, and different countries’ adaptation and mitigation response options. This assessment report informs all IPCC participating countries’ national-level policy responses aimed at reducing greenhouse gas emissions to levels which scientists have identified are necessary to keep the global average temperature from rising more than 1.5°C relative to pre-industrial levels.

The IPCC’s next publication, the Sixth Assessment Report, is due out in 2022. Pinto is now one of six scientists currently based at the University of Cape Town to be included in the panel’s scientific reviewers. He is a lead author on the regional chapter of the report, which gives an assessment of weather and climate extremes across various continents. The other five scientists includes FCFA colleague Dr Rondro Barimalala, as well as Associate Professor Gina Ziervogel, Dr Chris Lennard, Professor Bruce Hewitson, Dr Brett Cohen, Professor Mark New, and Professor Harald Winkler.

‘This chapter of the IPCC report starts by looking at observed and projected changes in extreme events, such as temperature extremes, tropical cyclones, droughts, and extreme storms across different regions of the world,’ explains Pinto. ‘We do this by assessing the peer-reviewed literature. Then we come up with a clear message about what’s happening in the natural world, and what is likely to happen in future, with regards to these extreme events.’

Pinto and his co-authors on this chapter of the IPCC report are in the process of writing up the final draft, which will go for external review.

Professor Bruce Hewitson, based in CSAG where Pinto works and one of the other UCT scientists working on the IPCC panel, says that for an emerging climate scientist like Pinto, being an IPCC lead author is ‘like a graduate class at a platinum level’.

The role is challenging, where someone either engages or will fall away, Hewitson told a UCT news service in March this year.

‘You are dealing intellectually with the cutting edge of the conceptualisation of the science,’ Hewitson said.

Pinto’s work with FCFA comes to an end in December 2019, and his post-doctoral position concludes in June 2020, after which he hopes to continue working in the area of atmospheric sciences.

Dr Izidine Pinto is part of the Future Resilience for African Cities and Lands (FRACTAL) research consortium. FRACTAL aims to link city environments and climate scientists in order to support decision-makers to integrate this knowledge into climate-sensitive decisions at city-regional scale in sub-Saharan Africa.