The purpose of the edit-a-thon was to address an enormous gap on Wikipedia of African content and contributors. An edit-a-thon is an organised event bringing a group of people together to edit and improve a specific topic on Wikipedia.

2018 marked a turning point – where more people are online than offline. And as the world’s fifth most popular website with 20 billion page views per month, one cannot ignore the importance of Wikipedia in sharing Africa’s knowledge, experiences and perspectives on climate change with the global community. There is also an incentive for researchers to add their work to the platform – Thompson and Hanley (2018) have found that scientific articles referenced in Wikipedia receive more citations.

Africa has the fewest Wikipedia contributors per capita of any other region. A 2014 survey found that Africa contributes only about 1.3% of the world’s edits on a monthly basis. Page edits from Hong Kong almost equal edits from the entire continent of Africa (15 000 edits in Hong Kong vs 19 000 edits in Africa per month).

This challenge in terms of coverage and contributors has been identified as the ‘Africa gap’.

Reflecting the diversity of human knowledge

At the event the President of Wikipedia’s South Africa chapter, Douglas Scott, highlighted that Wikipedia’s aim is “to give free access to the sum of all human knowledge to everyone, everywhere.” But to achieve this, Wikipedia is reliant on diverse contributors reflecting the richness and complexity of the world’s knowledge.

With this group there was significant potential to enhance the depth and breadth of climate change information on Wikipedia. 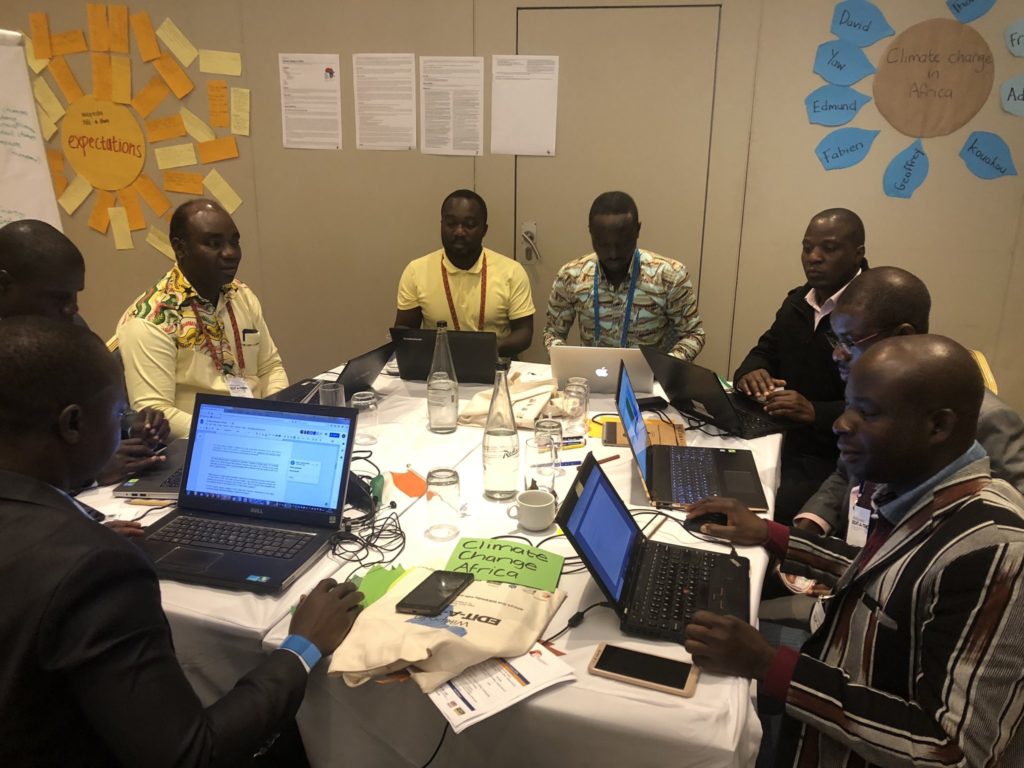 Over the three days the researchers tackled some major gaps on Wikipedia where Africa-related content was lacking, working in groups to use the opportunity to leverage their collective knowledge and understanding to edit larger topics on existing Wikipedia pages such as Climate change in Africa, climate change adaptation, climate change and agriculture and drylands. [Read Katharine Vincent’s reflections on how the editing process worked for the climate change adaptation page here, as well as why she thinks Wikipedia is an important tool for research impact.]

Veteran Wikipedia editors from Wikimedia South Africa were also on hand to guide participants through how to contribute.

Participants focussed on enhancing the representation of African research on Wikipedia pages, including adding more citations from African researchers, as well as links to important projects and programmes in the region.

By the third day the new editors had made significant progress. Andy Nyamekye from Ghana now based at Wageningen University noted that for the climate change and agriculture page “in the case of Africa there was virtually nothing. I added content related to West Africa. In our group one thing we kept in mind was making sure the language was accessible. We learned that we need to communicate to a Wikipedia audience in a different way to an academic audience.”

Kornelia Iipinge from the University of Namibia focussed on adding African-related climate programmes to the “external links” section on the climate change adaptation page to capture the multitude of initiatives on the continent related to adaptation work.

For the climate change in Africa page, Yaw Atiglo from the University of Ghana “gave the page some structure and shape and included sub regional sections on climate change information for West and East Africa where there was previously nothing. We cited African authors too, provided more links to other sources and created links to other Wikipedia pages.”

Grace Koech from the World Agroforestry (ICRAF) centre in Kenya worked on the climate change and ecosystems page. “I noticed there was no section on how the degradation of species is affecting livelihoods, so I added some information on this”.

For the drylands page Senegalese researchers working on Pathways to Resilience in Semi Arid Economies (PRISE) from the Collaborative Adaptation Research Initiative in Africa and Asia (CARIAA) added their latest findings to both English and French Wikipedia on the effect of climate change on agriculture value chains relating to beef and milk in semi-arid lands. The group also added a significant amount of information to a section on semi-arid lands.

Participants agreed this was just the start of their Wikipedia editing journey. The event closed with everyone looking at future possibilities for editing and creating pages – captured as leaves on a tree. The event also helped spark some potential collaboration. For example, one participant discovered another colleague from the University of Botswana who works in her area, “after the event we will look at working together to improve Wikipedia content on biodiversity and livelihoods. I also plan to go home and tell other researchers about Wikipedia and show them how to edit articles.” 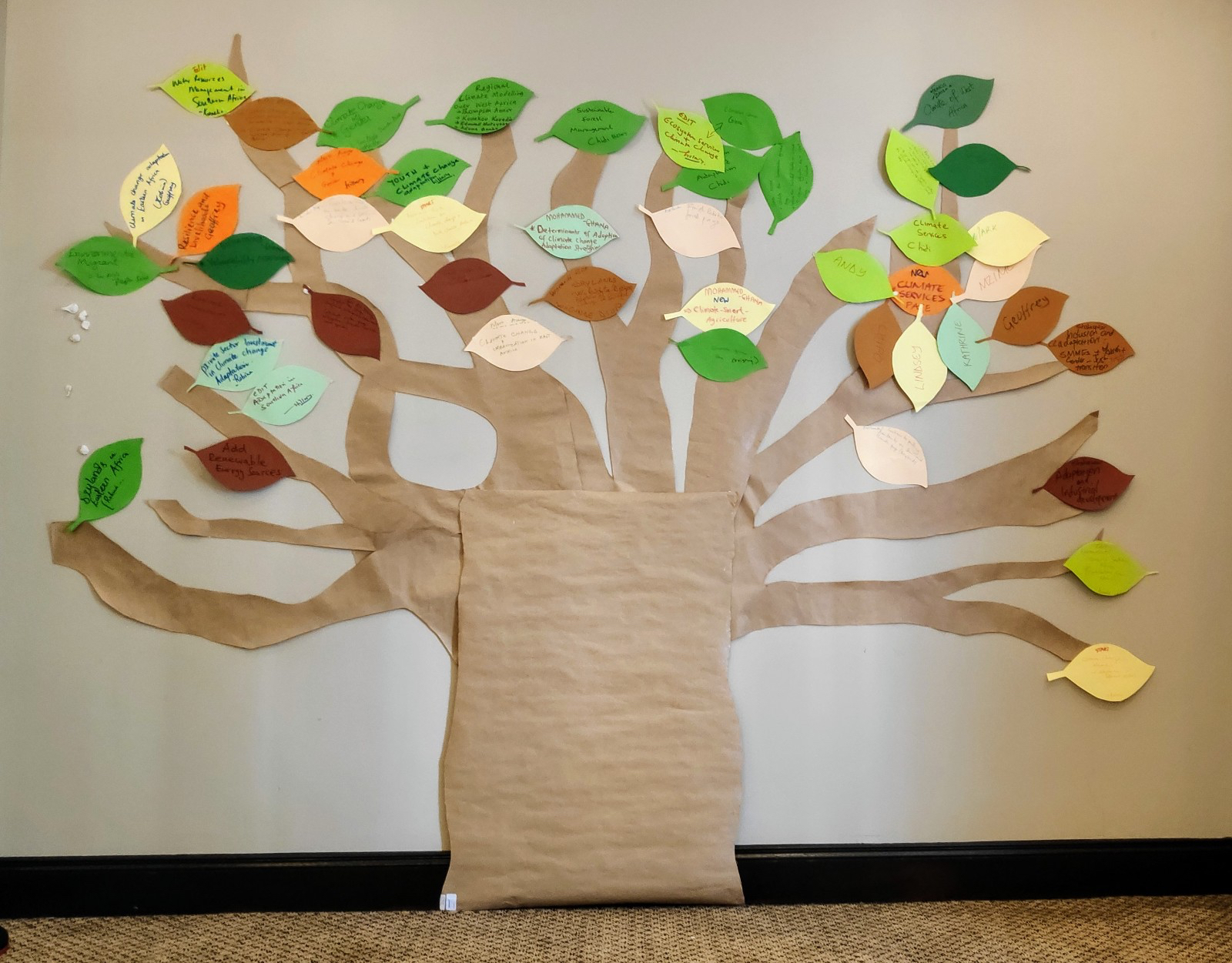 This article was written by Lisa McNamara of CDKN. The original news post is available on the CDKN website.