Share on facebook
Share on twitter
Share on linkedin
Climate scientists are making major advances in their understanding of Africa’s climate. Now they are figuring out how to present the information in ways that can help farmers, engineers, investors and other members of society make better use of it – reports CDKN’s Mairi Dupar. New frontiers

Delegates to the UN climate change talks in Marrakech, Morocco (COP22) heard about new frontiers in climate science for Africa in a special side event convened by Future Climate for Africa (FCFA) and the UK Met Office. Until now, information about Africa’s climate just hasn’t been good enough  — and needs a ‘step change’ to be truly valuable to African decision-makers, said Dr Richard Jones of the Met Office. Leading-edge work by the Met Office and its partners in FCFA aims make climate projections for the continent far more robust.

The problem is that the models which project the future climate have not done well at simulating the previously-observed climate records. They are not adequately capturing the complex movements in, and interactions between, the atmosphere and the oceans.

“We need our models to represent the influences of the ocean circulatory systems that impact the African climate,” said Dr Jones. For example, climate models currently tell us to expect more rainfall in Eastern Africa later this century, but this projection seems out of sync with the repeated droughts suffered in the region during the past 30 years. A major advance has been scientists’ relatively recent ability to model changes in Africa’s climate at a much higher resolution – using 4 x 4 kilometre grid squares instead of 25 x 25 kilometre squares as before (see the difference between the results, below).

The next frontier, said Dr Jones, is getting climate models to reflect how even smaller-scale processes happen, with important consequences for localities. As an example, he said, “cold downdraughts are important for processes leading to rainfall and dust uplift in Africa” (see diagram, below). In their latest research, the Met Office has managed to simulate cold downdraughts representing a scale of just a few hundred metres. 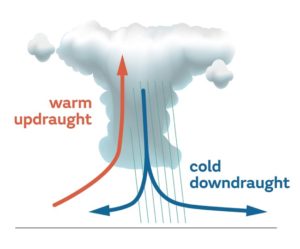 It’s also important for models to be able to represent the timing of rainfall accurately – not just how much it is expected to rain. “The ability of climate models to represent rainfall accurately has an effect on our understanding of how the water infiltrates the soil and therefore how it affects drought,” he said. The progress in understanding Africa’s climate presented by Dr Jones is just the first chapter in the larger scientific project the UK Met Office is leading under Future Climate for Africa. A more detailed explanation of the new modelling is provided in ‘Africa’s climate: Helping decision-makers make sense of climate information.’ Getting information into the right hands

Although scientists’ ability to generate better information is increasing, we can’t take it for granted that information will make it into the hands of those who need it most. This goes for people making decisions for the coming season: like when to plant a crop or which kind of seedling to select – to people making decisions with longer-term consequences: like how to build a port or a dam.

“We have come a long way in our ability to deliver climate services in Africa,” said Dr Arame Tall of the World Meteorological Organisation’s Network for Climate Services. “Now there is a lot more climate information to support adaptation planning. It is important to recognise that the gap is wide between those who hold climate knowledge and those who could use climate knowledge throughout the continent. I think of the farmers who are surprised [by weather that impacts their crops]”. That’s why, she said, an “operational bridge” is needed between climate labs and those who have the operational [means] to deliver climate information to support communities and policy-makers. “In some African countries, the operational bridge is non-existent. Let us make sure that no research endeavour or project omits delivery services,” he urged.

Weather and Climate Information Services for Africa (WISER), a project of the Met Office and national meteorological agencies in Eastern Africa, focuses on providing more accurate weather and climate forecasts for the short term (up to five years). Dr Claire Scanlon of the Met Office described how WISER has been designed to put the information user at the centre of climate research. Describing the two-way conversation that is necessary between the users and producers of climate information, she said “it is important for scientists to understand users’ vulnerabilities and needs and it’s also important for users to understand the constraints and probabilistic nature of the science so they can make better informed decisions.” One of WISER’s activities is developing a Multi Hazard Early Warning Service along Tanzania’s coastline. The project initially focuses on the marine, fishing, agriculture and oil and gas sectors and the public weather service. The Tanzanian Meteorological Agency and Met Office have been working closely with partners as well as representatives from the Disaster Management Department to understand stakeholders’ requirements and develop relevant early warning products and services together. If you can involve non-governmental agencies and community-based organisations in discussing what kind of climate information is helpful, and enlist their help in subsequently spreading the information – added Fiona Percy of CARE International – then you also benefit from a “multiplier effect”: one communication cascades to reach many. Major investors demand better climate information Climate information has a long way to infiltrate into decision-making – not just among coastal industries, farming communities or city managers, but also in large investment institutions in Africa. A new initiative launched at the previous year’s UN climate talks in Paris is gaining momentum to do exactly that. The African Climate Resilient Development Facility (AFRI-RES) was formed by the World Bank, African Union Commission (AUC), African Development Bank (AfDB), and United Nations Economic Commission for Africa (UNECA) to build the knowledge and capacity required to develop long-lived infrastructure in Africa capable of functioning optimally under in a changing climate. The facility is one of the components of the World Bank Group’s $16 billion Africa Climate Business Plan. The World Bank’s Rafaello Cervigni said: “This points to a big agenda for Africa, in terms of stepping up capacity to address the challenge and come up with a stronger institutional solution for doing so.”   Images (above): 25 x 25 km resolution versus 4 x 4 km resolution maps of Africa and cold downdraught image, courtesy Dr Richard Jones, UK Met Office.
Menu