Future Climate for Africa held a one-day training for Early Career Researchers (ECRs) in Cape Town on the 8th of September 2017. The training took place on the back of the successful FCFA Mid-term conference. The aim of the training was to improve the ability of ECRs to deliver high quality research to advance the frontiers of effective responses to climate variability and change. It is also expected to enhance their capacity and confidence to have strong intellectual contestation necessary to excel in an international scientific community. The ECRs in attendance were drawn primarily from climate and impact disciplines. A number of senior researchers also participated.

The training provided a practical segue to the theme and objectives of the conference by zeroing in on two important considerations for climate scientist, and in particular ECRs: Communication of climate change as a critical tool for internal and external engagement, and Impact as a critical part of the climate science. The third and final section of the training sought to sharpen collaborative proposal writing skills and provide the ECRs with insights into what funders of research are looking for in a successful proposal.

Communicating climate change is difficult at the best of times, given the prevailing lack of clarity around what constitiutes knowledge, and what is classified as information or simply data. Bruce Hewitson stressed the need to build the context that transforms simple information into knowledge. Participants were cautioned about the tendency to use simple data as a basis for decision-making. “The right handling is key: Sometimes data is just noise, and not information, and knowing the difference between signal and noise is crucial.” Stating for example that rainfall is going to increase does not mean anything unless one includes more information about intensity, distribution and other variables.

Communication of information is an ethical dilemma, compounded by among other things, research and political agendas, assumptions and linguistic misunderstanding. Climate scientists need to step out of their own roles as providers of information and anticipate the needs of users in order to successfully communicate actionable knowledge.

A group exercise illustrated the importance of anticipating the needs of different actors in the knowledge chain: climate scientists, impact modellers, climate services, and climate information users (in this case, city officials). The four groups were asked to take a sampling of data and communicate it as effectively as they could down the chain., While each group receiving the information was tasked with trying to understand it, anticipate and meet the information needs of the next group down the chain. 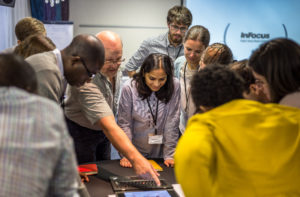 ECRs participating in a group exercise illustrating the importance of anticipating the needs of different actors in the knowledge chain.

The exercise effectively illustrated the problems inherent in communicating climate information: The scientists needed more data and didn’t know what the city people wanted. Climate services struggled with formulating a user relevant message with available information from the scientists. The impact modellers struggled to add value with the additional climate information to their existing product. The city officials felt that there was a lot of research and work happening, but none of it was of use to them. They also conceded to not really knowing what they wanted. Katharine Vincent closed the session by focusing on non-research audiences. Communication to these groups needs to be tailored, targeted and timely, and to as great a degree as possible, devoid of jargon that obfuscates the message. She illustrated how blogging, the popular press and strategic use of social media (like twitter) can greatly extend the reach and potential impact of research.

Declan Conway and Emma Visman’s session ‘Pathways to Impact’ focussed on taking research out of the ivory towers and targeting demonstrable social and economic impacts. “Whereas academic impact is the ability to shift understanding, economic and social impacts lie in demonstrable benefits”. Impact remains one of the least quantifiable elements of the work done by scientists, however it is possibly the most important yardstick by which researchers and research institutions are measured. The ECRs learnt that whereas there may not be as yet a commonly agreed upon measure of impact, there are ways to integrate the considerations thereof in knowledge outputs (academic and non-academic) and engagement with affected communities that may benefit from research. In the latter instance approaches to co-produce research agendas and priorities with affected publics are key. It not only contributes to the researcher’s own development, but creates pathways between the research and the desired social transformation. Declan suggested that it becomes easier to track impact if one focuses on the entire process of research and the collaboration with stakeholders, rather than just the final output.

The final session of the day was a proposal-writing and collaboration café hosted by Rosalind West of DfID, Helen Pearce of NERC and Sam Bickersteth of CDKN. The focus of this session was to give the ECRs an insight into the different considerations taken by funding institutions when assessing proposal for research funding. The session also pointed ECRs to different available funding options. Sam Bickersteth underlined the importance of partnerships in the process of developing and submitting funding proposals. Speakers made a link back to the previous session on impact pathways by advising the ECRs to learn how to manage expectations when preparing proposals. Helen Pearce emphasised that often times, the impacts of a project are only expected long after its conclusion but that this is not an impediment to the success of funding proposals, as funders had a very realistic view of what was possible.

Discussions followed the sessions with the ECRs asking for different points of clarity. ECRs highlighted the concern that African experts and networks of expertise are often excluded (directly or indirectly) from international calls focused on advancing research in and on Africa. DFID and NERC have to take care in how they design terms of reference and eligibility criteria of calls to not directly or inadvertently exclude African experts and support to African institutions. The levels of engagement by the ECRs and the willingness of the different principal investigators in attendance to share knowledge was a clear indication that FCFA is building effective learning and collaboration pathways.

Training concluded with a collaborative research proposal “speed writing” game in which ECRs formed multi-disciplinary teams and developed proposals to an advertised call. The energy, original thought, and spontaneous collaboration that went into the proposals served as an inspiring harbinger for the participation of this nascent class of early career researchers in future international research calls