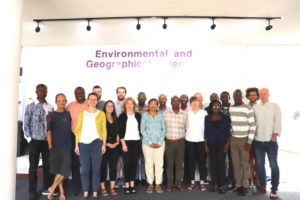 LaunchPAD (Priority on African Diagnostics) is a 15-month research programme that aims to improve the availability and use of climate information on 5 – 40-year timescales through climate model evaluation with an African lens, designed to improve the understanding of how models represent climate over African regions. LaunchPAD is a key part of the FCFA IMPALA legacy in improving, sustaining and progressing the African climate model work and maintaining and extending the collaboration and network between British and African research institutions.

The LaunchPAD team includes 5 Co-Investigators and 10 early career fellows in 4 African universities, as well as a full-time software engineer, research associate, and 3 Co-Is in the UK.

The main objective of LaunchPAD is to develop evaluation tools that can be automated across climate models. Climate model evaluation research can be very time consuming – by automating the analysis, the team hopes to make it much easier and quicker for other scientists and model developers to find out how new models represent Africa. This is a necessary first step if climate models are to be improved over Africa.

The evaluation tools developed by the research team focus on processes which are important in each African region: for example tropical cyclones in the Mozambique Channel, the interaction between sea surface temperatures in the Gulf of Guinea and rainfall over West Africa, and the low-level westerly winds which enter the Congo Basin from the Atlantic Ocean. In each case, the researchers analyse these processes in models, comparing the modelled climate with our observations of the real world. Then they identify a key “diagnostic” which can illustrate how the modelled climate compares with observations – such as a map or a graph. Software is then developed which can reproduce the same map or graph for any climate model, allowing for quick comparison and evaluation when new climate models are released.

The first two days of the workshop allowed the 10 fellows of LaunchPAD to work individually but also provided the opportunity for them to work with the researcher (Tom Webb), Oxford research associate (Ellen Dyer), and each other. This gave them the time to troubleshoot or ask questions relating to their research and to help develop their scientific analysis into diagnostics. During these sessions, the fellows also received training on using JASMIN which is a platform for data access and analysis. 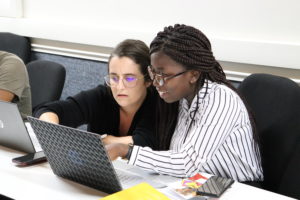 Two of the LaunchPAD fellows share and discuss their model evaluations.

The following three days of the workshop brought together the full team of LaunchPAD, where researchers and fellows discussed and shared regional climate model updates from West, East, Southern, and Central Africa.

Babatunde Abiodun, a Co-Investigator from the University of Cape Town (UCT) presented an overview of the model evaluation metrics over West Africa pre and post IMPALA projects. The results show that post-IMPALA, the model better-captured temperature although there were some biases on the cold temperature which influences the monsoon over the Sahel region. “There is a need to include the onset, cessation, length of the rainy season as part of the diagnostics over West Africa”, said Babatunde. 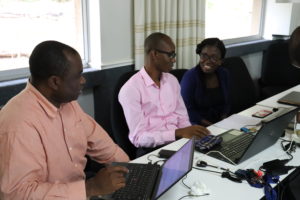 Researchers focusing on the West African climate discuss their work.

The fellows whose studies are based in West Africa were also given the opportunity to present their progress to date. For example, Makinde Akintunde from UCT presented his research which aims to evaluate how the models in CMIP6 capture the West African Westerly Jet (WAWJ). “The preliminary results show that the model captures the WAWJ but it over-estimates the wind speeds and the location of the jet”, said Makinde.

Joseph Mutemi, a Co-Investigator from the University of Nairobi, gave an overview of the key results and messages of the East African extremes pre and post IMPALA project. “Metrics informed by good analysis of model data and important moisture-thermodynamics indices must be included in the East African diagnostics”, said Joseph. One of his research fellows, Oscar Lino, will be working on connections between moisture fields and precipitation across different spatial scales. 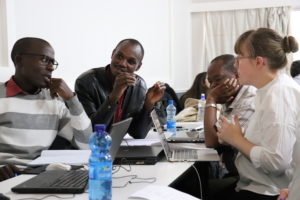 Group discussion between the East African researchers and fellows.

The Co-Investigator, Chris Reason from the Department of Oceanography at UCT presented an overview of the projects they have undertaken over the Southern African region. This includes how various processes influence the variation of rainfall over the region. His fellow Rondro Barimalala shared her work which is aimed at examining how gradually reducing and then removing the topography of Madagascar influences the Mozambique Channel Trough (MCT) annual cycle. This session ended with an overview and progress of the UMFULA southern Africa diagnostics by the Oxford researchers Richard Washington and Rachel James. 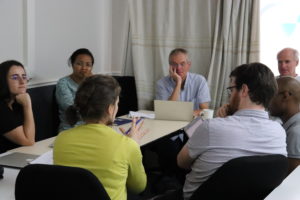 Group discussion between the southern African researchers and fellows.

Some team members from the University of Yaounde I, Cameroon, were unfortunately delayed due to visa complications, but arrived on Thursday and presented their research on Friday. The team, led by Wilfried Pokam, have made great progress in improving understanding of the climate of the Congo Basin, which is greatly understudied. Now they are working to develop diagnostics to analyse key features in climate models, including the African Easterly Jets, and Low-Level Westerly winds.

As LaunchPAD progresses, the fellows will continue working with the software engineer as they develop their codes for diagnostics and eventually automate evaluation tools with JASMIN. This activity will give the fellows the opportunity to learn to programme in Python. LaunchPAD will also give the fellows a 4-week secondment opportunity to the UK where they will engage with researchers at the University of Oxford and the Met Office. The project will have a final workshop where the fellows and researchers will plan the next steps for the emerging Model Evaluation Hub for Africa.

This article was written by Luleka Dlamini, Beth Mackay, and Rachel James.