Communicating climate information effectively with target audiences such as government technical staff starts with well-conceived and carefully packaged communication materials. But it doesn’t end there. According to recent research by a  four-year multi-disciplinary team working on generating new climate information for Africa, ensuring audience up-take of this information calls for understanding the environment in which the audience receives and uses these materials.

For example, does the person receiving this communication material have enough agency within their work context to use it effectively?

‘In the climate communication sphere, there has long been a focus on the information supply side,’ explains Dr Katharine Vincent, a geographer with the South African-based environmental consultancy firm Kulima Integrated Development Solutions and a visiting associate professor with the University of Witwatersrand in Johannesburg, South Africa.

The assumption is often that if climate scientists simply produced good communications material, the task is complete.

‘Although, while there is no shortage of good climate information, there is still a big ‘usability gap’, where scientists are producing this material but people on the ground aren’t using it,’ Vincent says.

Vincent and fellow climate researchers with Future Climate for Africa recently completed a review of the initiative’s four-year project aimed at generating new climate information for Africa. They wanted to better understand what hurdles might prevent even well-crafted climate communication material from being used by the target audiences.

It is important to consider the institutional environment in which the target user of this information works, FCFA researchers found. If, for instance, a government official has agency within her position, she might be able to use that material effectively within her department, share it with colleagues, and have it inform policy making or planning decisions. But if not, even excellent communication material may not be used effectively.

Agency in the workplace: how receptive the target audience is to climate information

In many sub-Saharan African countries, where FCFA worked, government structures are hierarchical, and officials often need to defer to their superiors. This can create a bottleneck to climate information being acted on within that individual’s department or sphere of influence.

‘It is important for climate information communicators to consider whether there is an enabling institutional or policy environment in which the target audience for that information works,’ she elaborates.

One case study highlighted by researchers, who published their findings in the journal Climate Risk Management in July 2020, is that of the presidential approval given to the Julius Nyerere Hydropower Project in the Rufiji River Basin in Tanzania. The project is expected to impact significantly on water availability for other sectors such as irrigation and wildlife, and the effect of climate change may amplify the tensions between these competing interests for water.

‘Once the decision was made for this infrastructure project to go ahead, it showed how important policy and institutional contexts, capacity, and agency were within the relevant Tanzanian government departments, in terms of their ability to act on the climate information they were receiving,’ explains Vincent.

In order to respond to this context, FCFA climate researchers adapted the design and output of their climate information.  Rather than producing climate information that might warn against building the hydro-power plant, researchers worked to explore options to manage the water demand trade-offs that will need to be made, given that the decision to go ahead with the dam is now a fait accompli.

In the case of working with strictly hierarchical government structures to support the uptake of climate information, researchers argue that even if the information is well tailored for an official who has technical expertise relating to climate change, that individual’s superior may not have similar expertise, which may prevent the information from being acted upon. Another common hurdle is when government officials or ministers, who may be receptive to this information, are rotated out of a position and replaced by someone who may not be as open or have the same incentives to use the information effectively.

In their analysis of the uptake of FCFA’s climate information, Vincent and colleagues identify an additional case study from the private sector which demonstrates how effective climate communication can be when the audience has agency within their institution or sector.

‘We worked extensively with the tea sector in Malawi and Kenya. In the process, we found that for some stakeholders, such as the tea estates, the common way of presenting climate information — which talks about average increases in temperature or changes in rainfall — was not useful to them. They needed to know about what the important temperature thresholds were for their region, such as how many days the temperature might climb above what is optimal for tea growing,’ explains Vincent.

FCFA was able to refine its climate information accordingly. Researchers then found that the recipients of that information were able to act on it, not just because it was tailored to their needs, but because the tea estates had decision-making power — a high level of agency — within their businesses and could act on what they learned from the information packages. 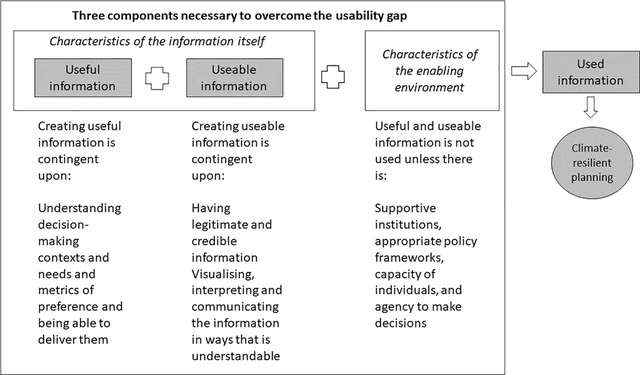 Recommendations for the climate information community

‘The message for others in the climate information community is that it is important to consider the institutional and policy environments in which the target audiences work,’ concludes Vincent.

Vincent urges others in the African climate information community to consider the audiences’ working context as they design future projects aimed at providing policymakers, politicians, and other stakeholders with climate information that they can use.

‘Paying attention to this will increase the likelihood of that information being acted upon.’