Partnerships and collaboration key to addressing water and sanitation challenges under climate change in Lusaka, Zambia

Lusaka has experienced a 1-degree temperature rise over the past century and will continue to warm and possibly dry out into the future.  It is likely to experience more intense rain events even with the drying. These projections were presented by Dr. Chris Jack of the University of Cape Town’s Climate System Analysis Group (CSAG) at a recent FCFA FRACTAL project breakfast meeting held in Lusaka.

The breakfast meeting was the culmination of a three-day visit by FRACTAL members, which included a one-day training on climate science and the impacts of climate change on water, sanitation and hygiene (WASH) in Lusaka, and a learning lab. FRACTAL uses the learning lab approach to co-explore the climate and WASH space in cities with various stakeholders so as to identify the priority issues, and better target the science to address real challenges of concern to the city.

The projections presented by Dr. Jack at the breakfast meeting were supported by a follow-up presentation on potential impacts of future climates on WASH by Prof. Richard Jones of the UK Met office. The results present a dire outlook for the city that could include water and hydropower shortages, health crises and conflict. Reacting to these projections, a long time resident of Lusaka’s oldest informal settlement Kanyama, Ms Veronica Katulushi stated “How are we going to survive if we do not preserve this precious commodity [water]?” Veronica made an emotive plea to stakeholders to come together to address the challenges she and other residents of Kanyama regularly grapple with, especially water shortages, flooding, and water-borne diseases. “Tiyeni ti bombe pamo (we need to work together), she encouraged, “NGOs, government and communities cannot meet the challenge alone.”

Various members of city and state leadership graced the breakfast meeting, including the Minister of Water Development, Sanitation and Environment, Hon. Lloyd Kaziya, the Deputy Mayor of Lusaka, Ms Chilando Chitangala, city councillors and directors of key water and climate-related organisations in Zambia.

Echoing Ms Katulushi’s sentiments, the Minister of Water Development, Sanitation and Environment, highlighted in his speech that in light of growing populations and a changing climate, partnerships are key to unlocking the potential to achieve the state’s vision of Water for All in Zambia. He stated that the Zambian government is already embarking on large-scale projects such as dam construction and rehabilitation in anticipation of future challenges under climate change. The Minister Kaziya closed off with a word of appreciation for the efforts of projects such as FRACTAL in taking up the challenge and seeking to understand and address Lusaka’s climate change impacts in WASH. 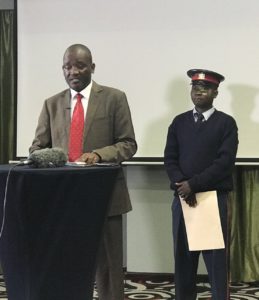 The Deputy Mayor spoke of the various plans and actions in place to pre-empt climatic hazards – a departure from the reactive responses of the past. She spoke of the 10-year vision for a city better prepared to deal with the impacts of climate change especially torrential rains (and associated flooding), and drought, that commonly affect Lusaka. She added that the city’s current efforts in engaging with the climate challenge, make it one of southern Africa’s leaders in engaging with the climate science to better plan for a future under a changing climate.

Overall, it was clear from the deliberations at the breakfast meeting that issues of climate resilience in African cities is a most welcome development because cities have been playing second fiddle to rural agriculture and livelihoods in climate change resilience discourse in the past. There is a realisation that cities are where the future of African populations lie and therefore urgent action is required to build their resilience to climate change. As such concerted collaborative efforts are necessary to tackle the potential impacts of climate change on the urban WASH sector.

The councillor of Kanyama concluded the breakfast meeting with a sobering call for collaboration and better planning – “…unless we sit together and plan for the future, there is no hope for our cities and residents of informal settlements.” In light of this call, it was encouraging that Lusaka recently put together a multi-stakeholder platform that includes NGOs, state agencies, academia, community-based organisations and the private sector (Lusaka Water Security Initiative (LuWSI)), to start to coordinate efforts across multiple players in WASH. This platform will be key to future efforts to address WASH under climate change.

Watch video of the meeting here.